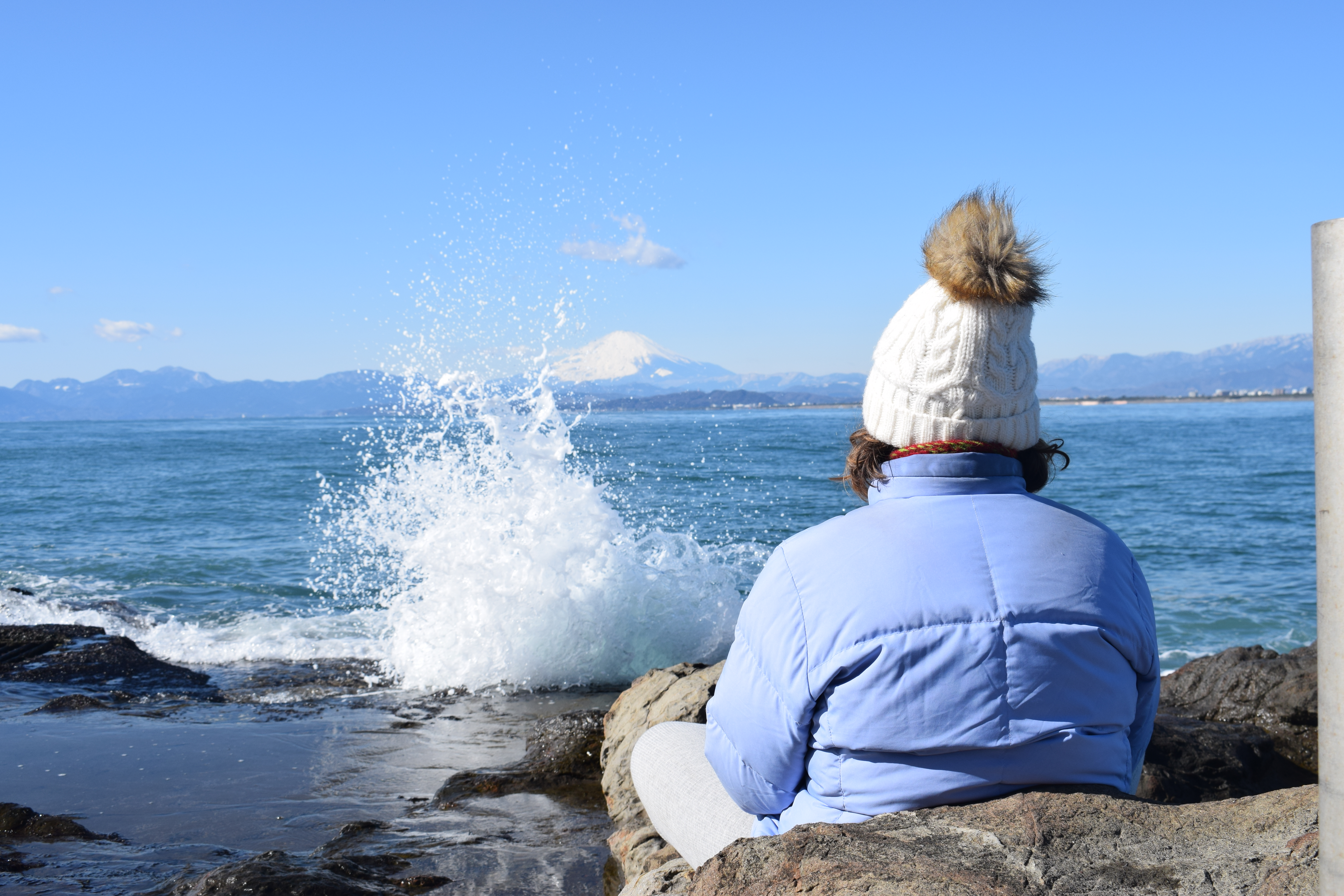 The first time I visited Enoshima, I had the best time. I couldn’t wait to come back and keep exploring. So when a friend came to visit, it was no-brainer destination for us to go for the day.

This time, I was without my local friends, so the first destination we visited after getting off the train was the tourist office, located on the way to the main bridge to the island. The tourist office gave us a handy map of the island in English, with detailed descriptions of each attraction included on the back. So much to do!! 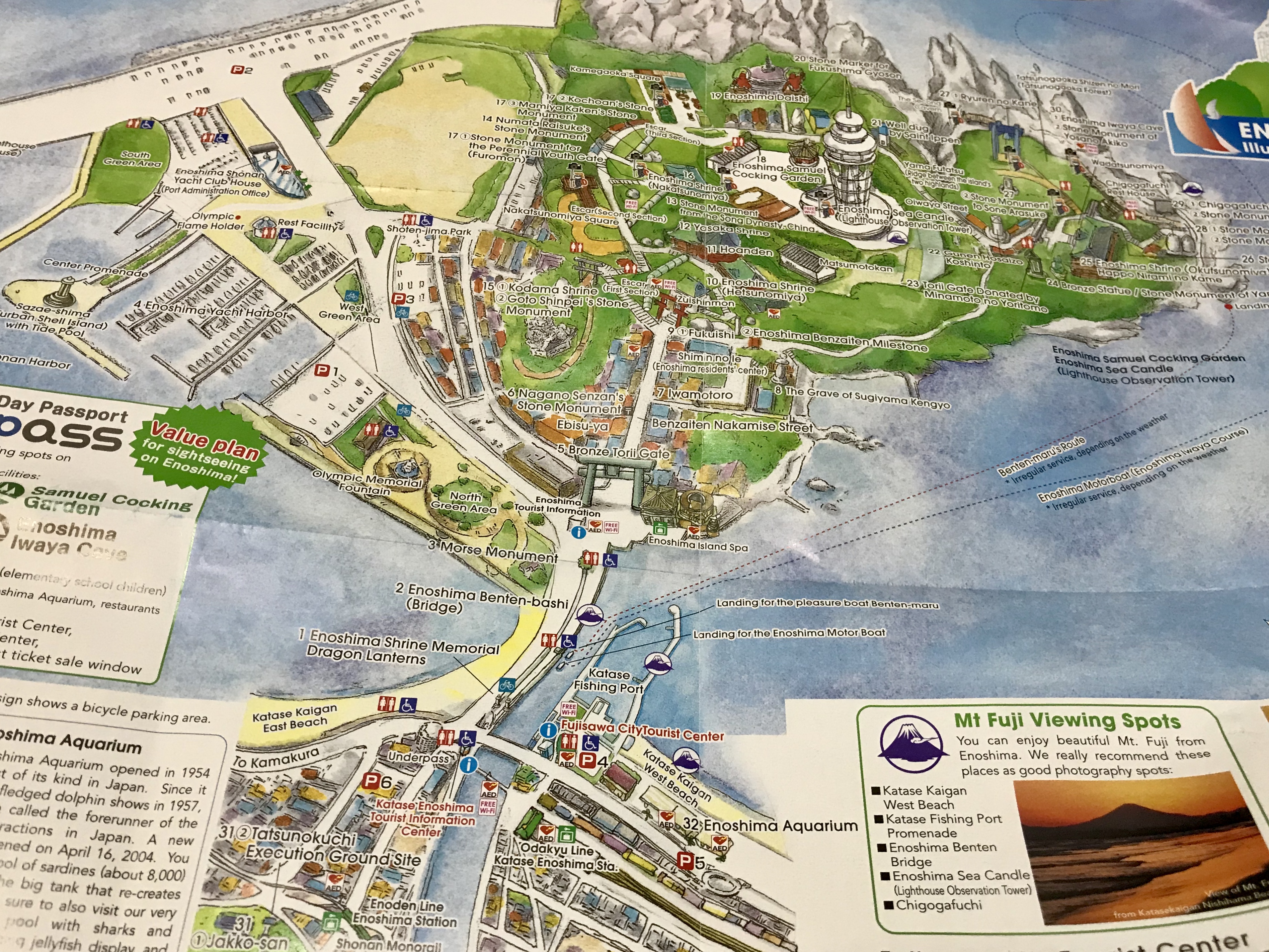 There is an option to buy a one day enopass. The pass costs 1,000 JPY for adults and 500 JPY for children and includes access to the Enoshima Escar (an ascending escalator up the mountain in case you don’t want to climb up the stairs), Samuel Cocking Garden, Enoshima Sea Candle (the amazing lighthouse observation tower), and Enoshima Iwaya Cave.

Regardless, the pass was “temporarily unavailable” for us. I think it’s because the Iwaya Caves have been closed due to a typhoon. They’re being rebuilt and will hopefully open up soon. Without the caves, the pass is not worth it. Access to the Samuel Cocking Garden + Enoshima Sea Candle (located inside the garden) costs 500 JPY. I was excited to climb, so the idea of an escalator did not appeal to me.

The total you would save with this pass, if you did all the things offered would be 360 JPY. So I don’t think it’s worth it even when available unless you do need to take the escalator if you’re in a hurry or unable to climb.

We decided to walk past the main temple, since I already visited it, and hike on the west side of the island. The hike included gorgeous views of Mount Fuji! 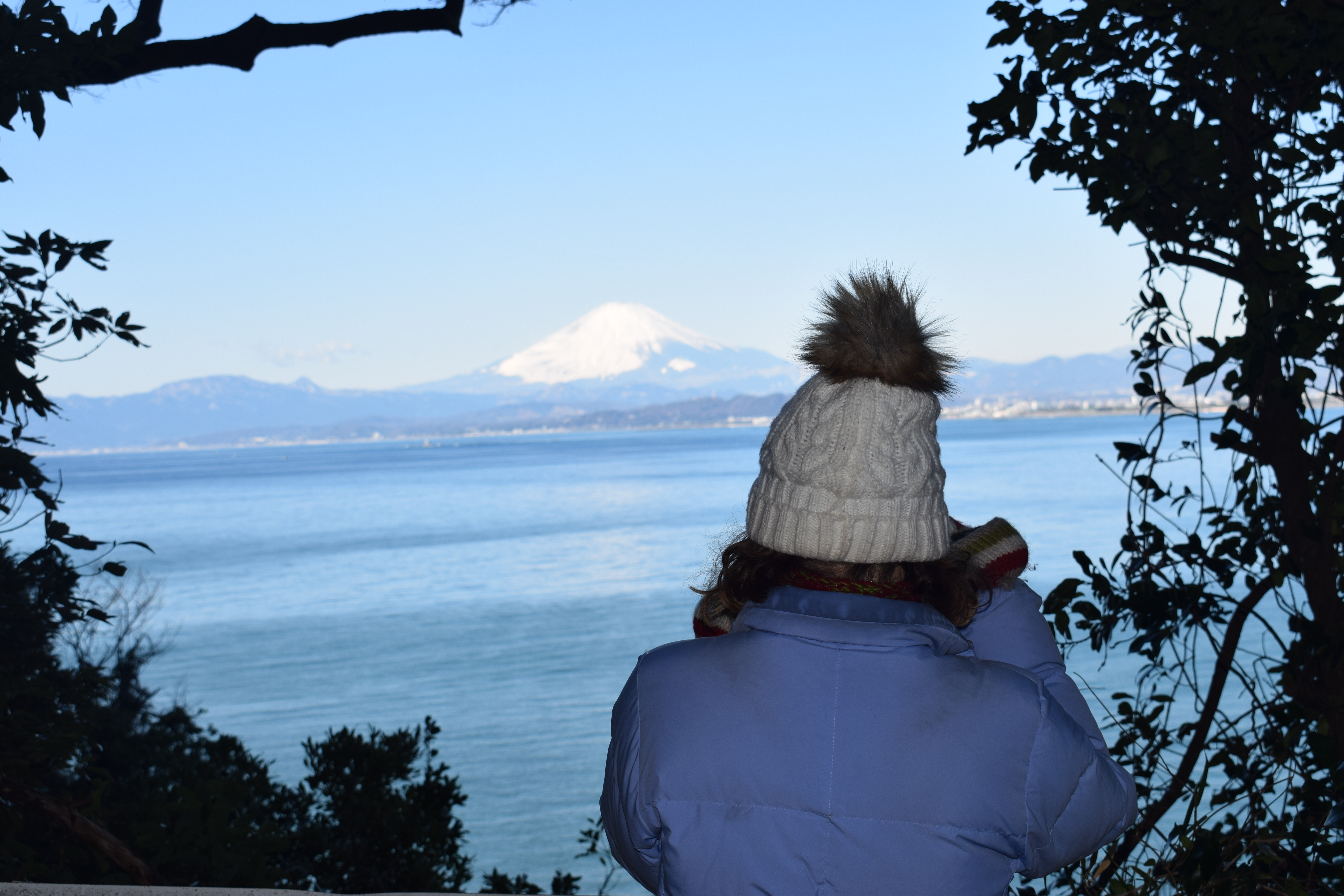 We hiked until we ran into the Okutsunomiya Shrine, the oldest of the three shrines of Enoshima. The shrine has a turtle theme. Can you see the turtle in this rock?!! 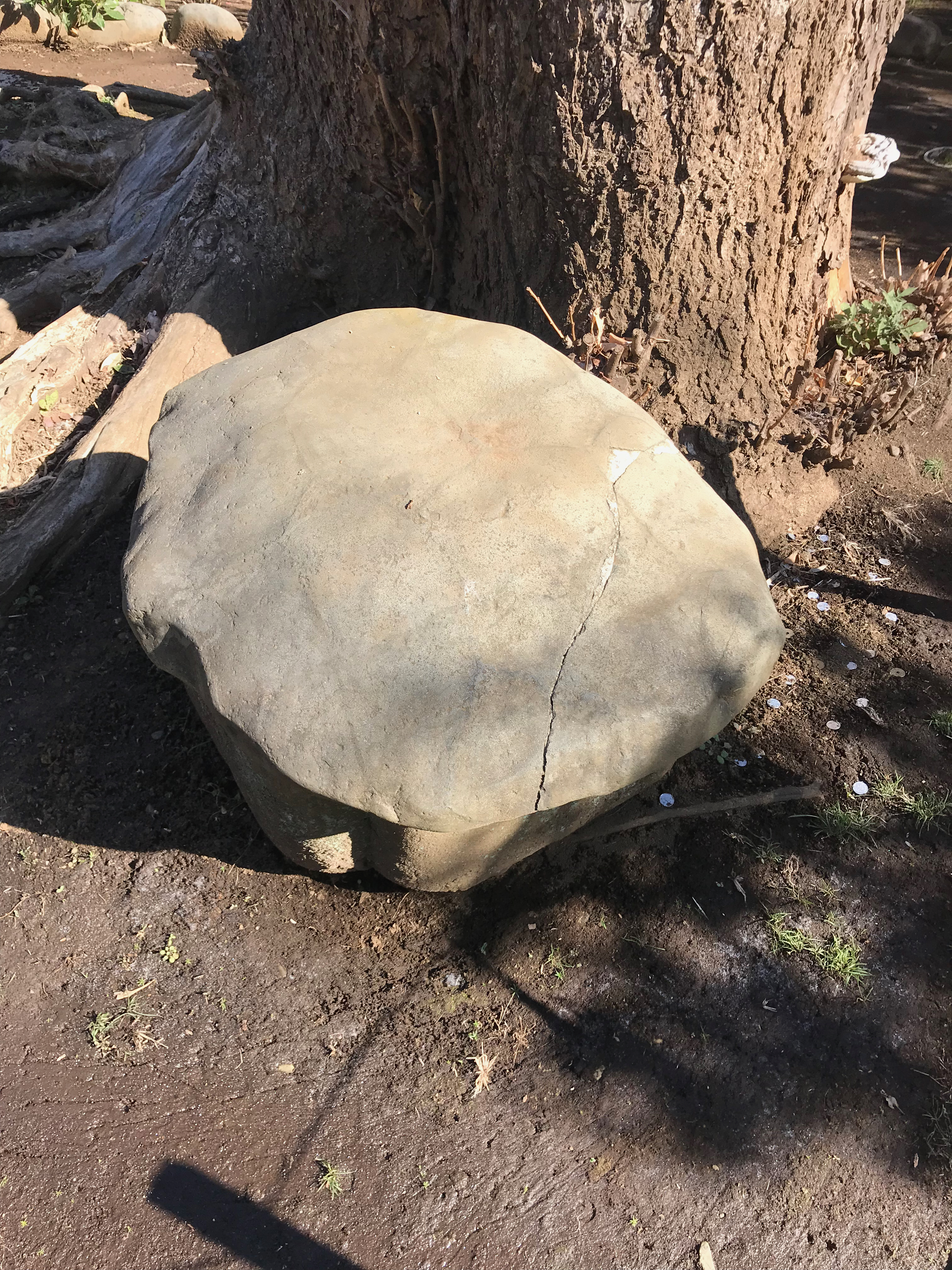 There were tourist signs for each statue and rock and tree and commemorative sites. I was completely captivated by this one describing a picture of a turtle: 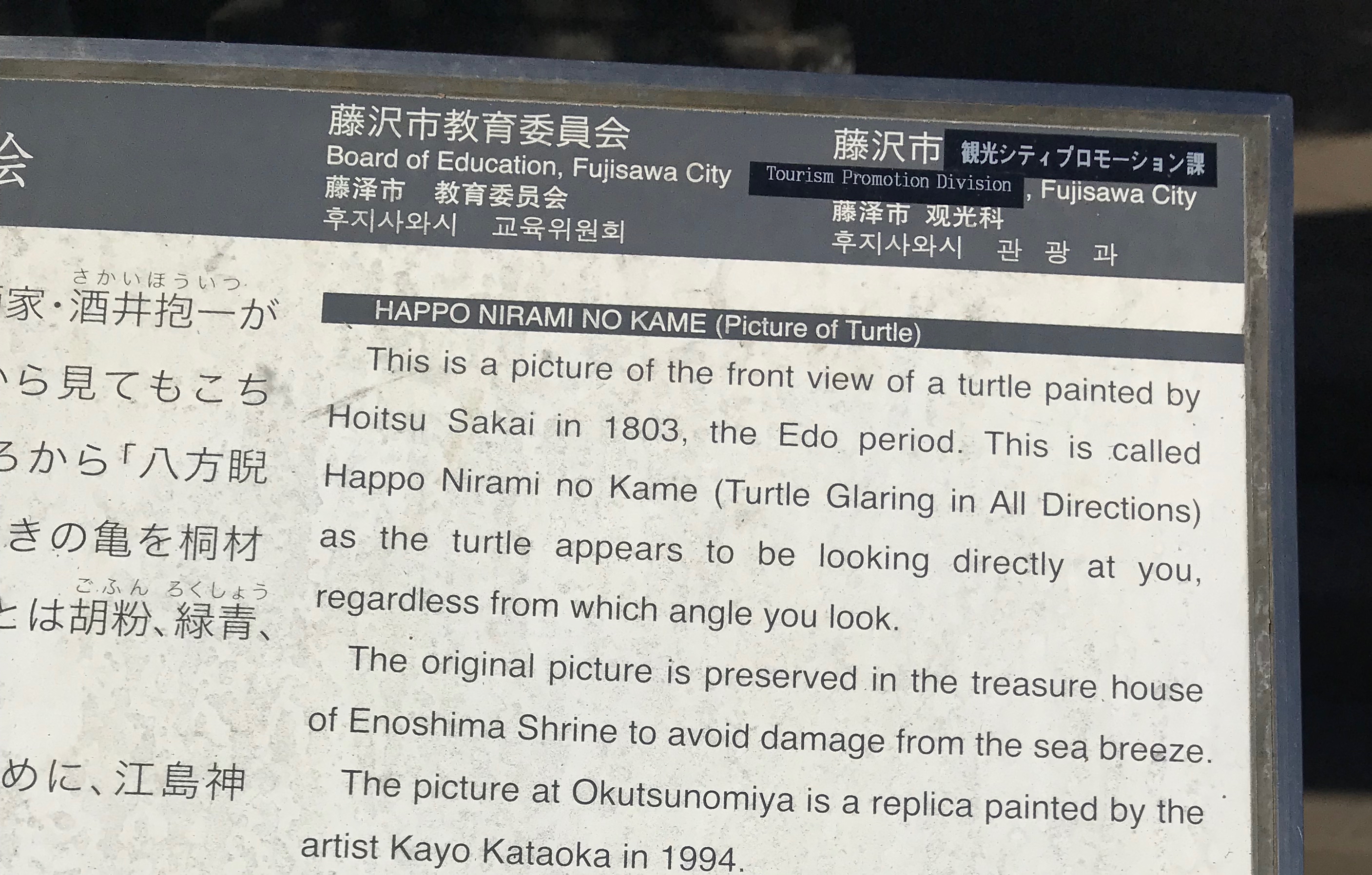 The only problem… THERE WAS NO PICTURE!!! My friend and I looked everywhere for it! But I felt like I couldn’t leave without seeing it. Now that I couldn’t find it, I wanted to see it even more. I googled around, and found the answer - we had to look up.. the turtle painting was on the ceiling! 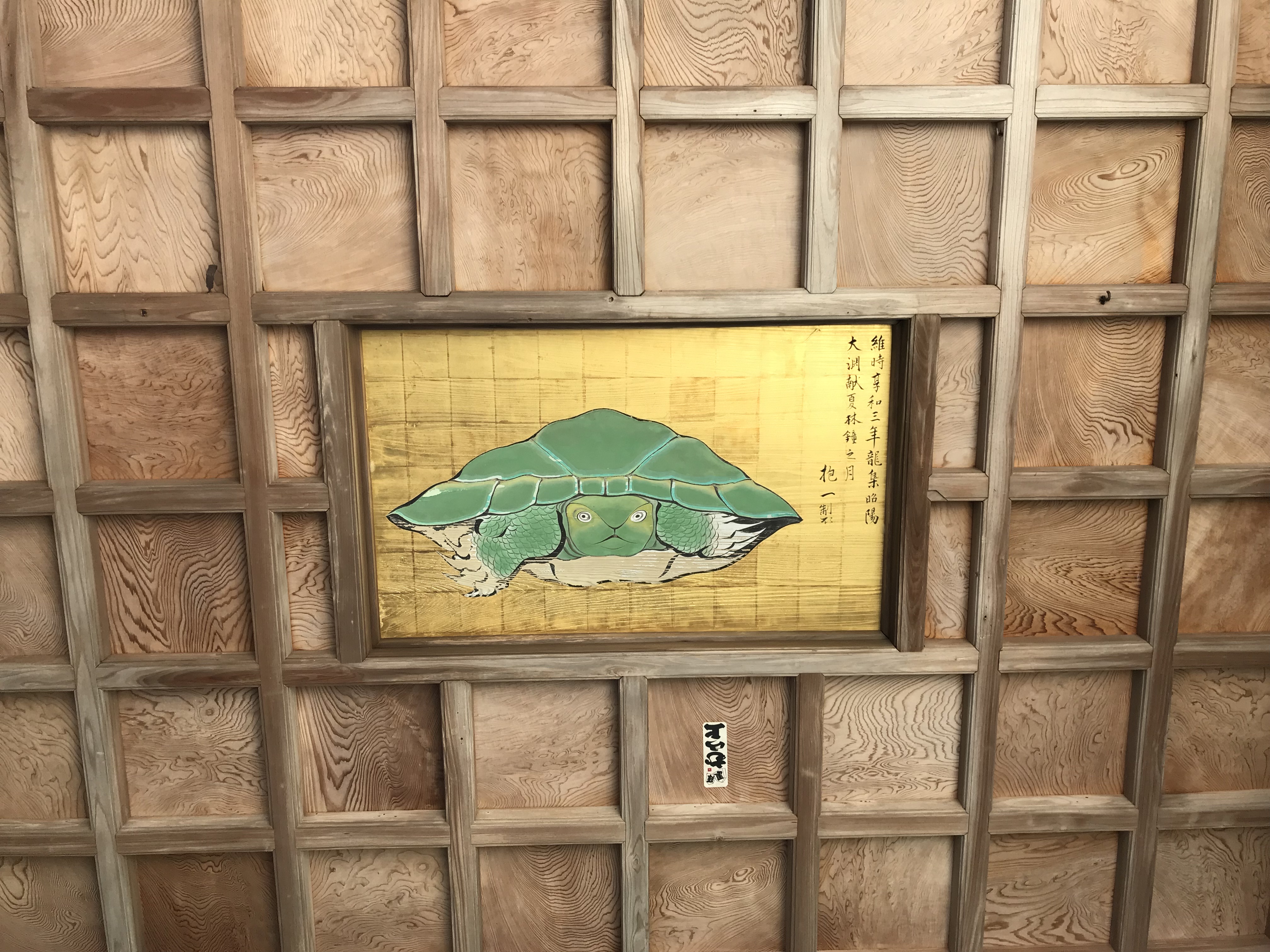 Ok, now that’s an INCREDIBLE turtle - don’t you agree?!!! I’ve never seen one painted like that. You can see the ninja ready to pop out of it. And those eyes! They did in fact follow me around the shrine. I’m so glad we found it!

Next to this shrine, there was another one with the most amazing dragon statue on the top: 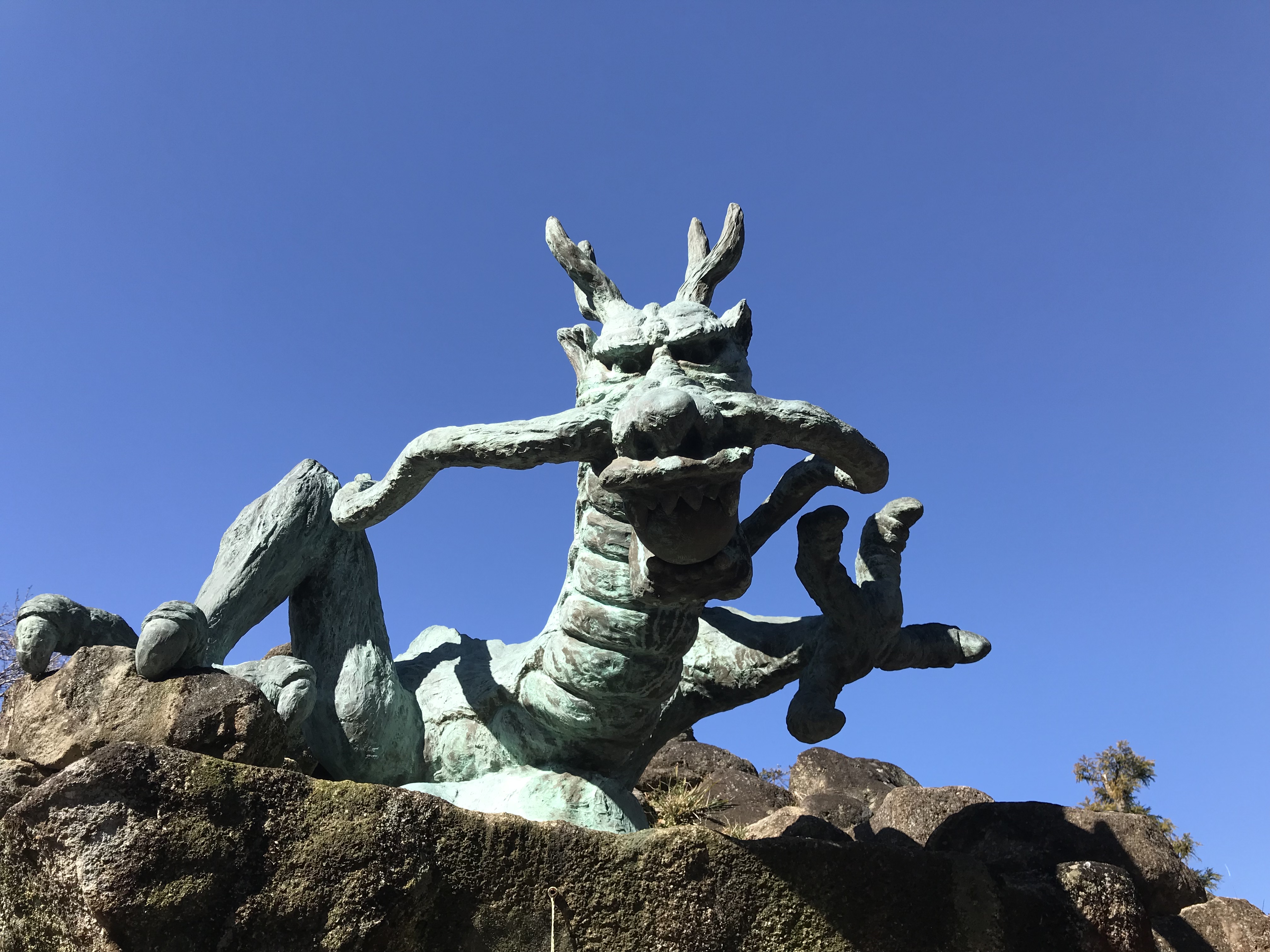 The Bell of the Dragon’s Love

Next up, a bit of a detour into the forest, was the super cute love locks park. You know those bridges in Paris where lovers put a lock with their initials on them and throw away the key? This park was dedicated just for that! 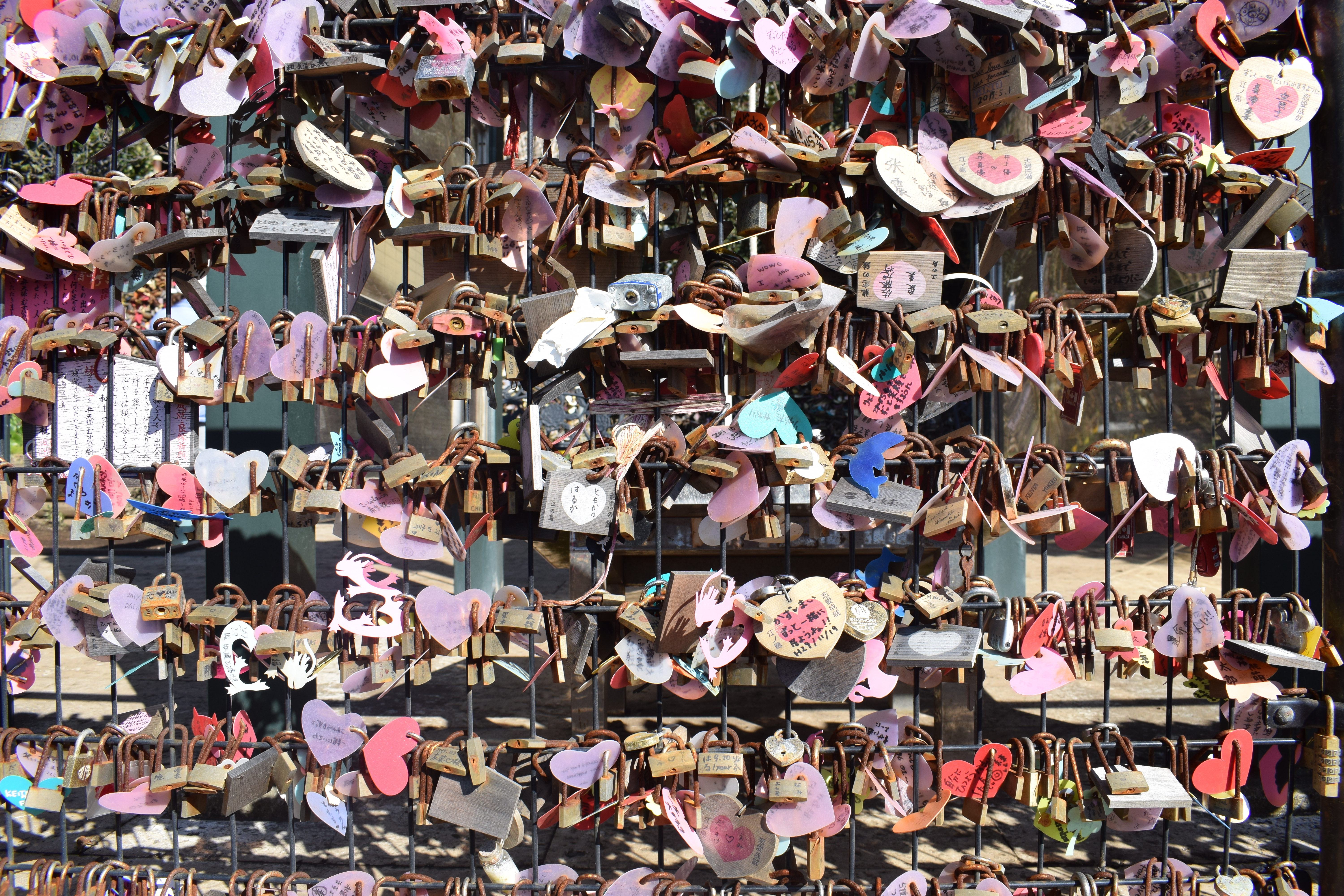 In the middle, there was The Bell of the Dragon’s Love - how beautiful is that?!!! 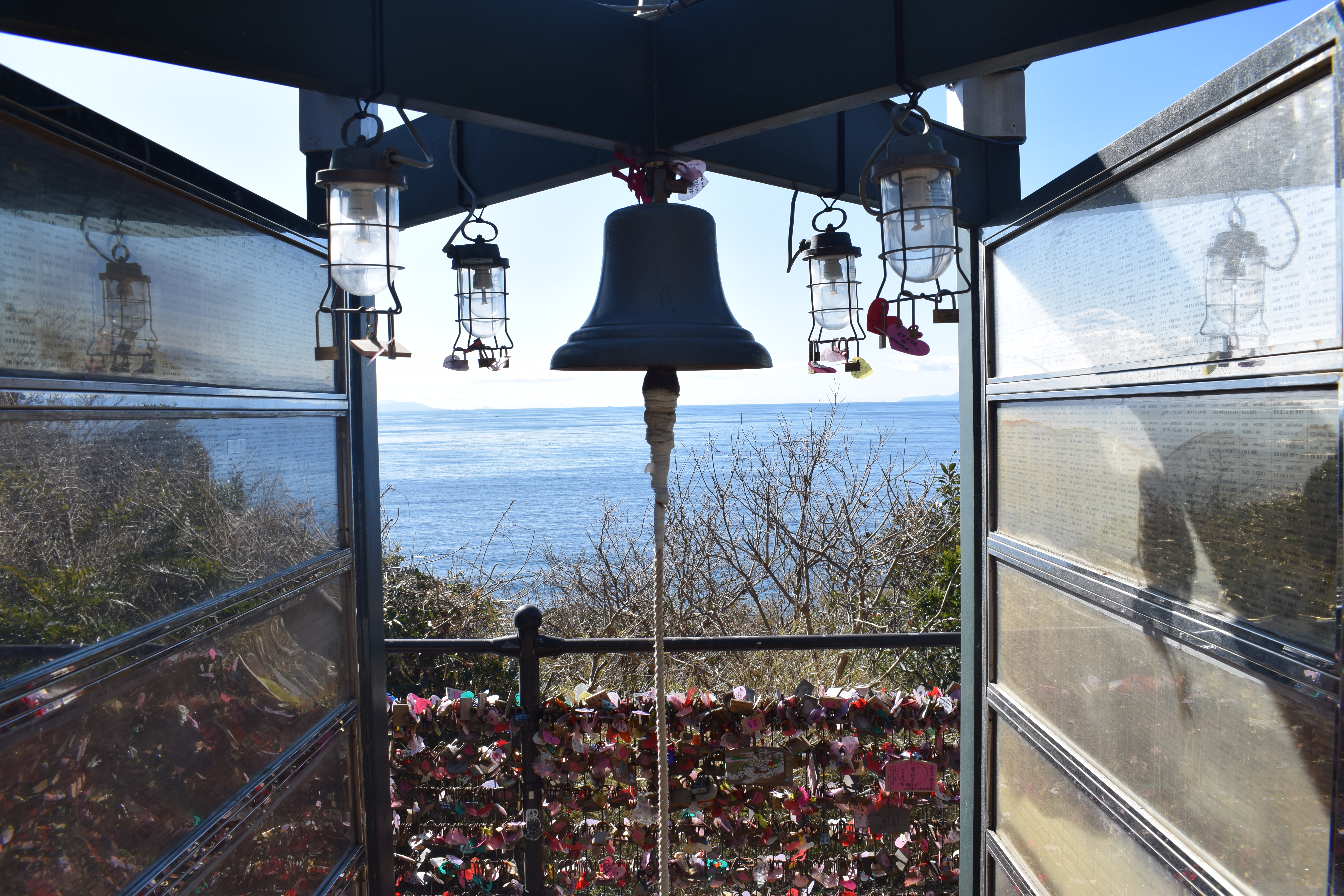 Underneath, there was a beautiful love story between a maiden and a big bad dragon connected to the legend of the island: 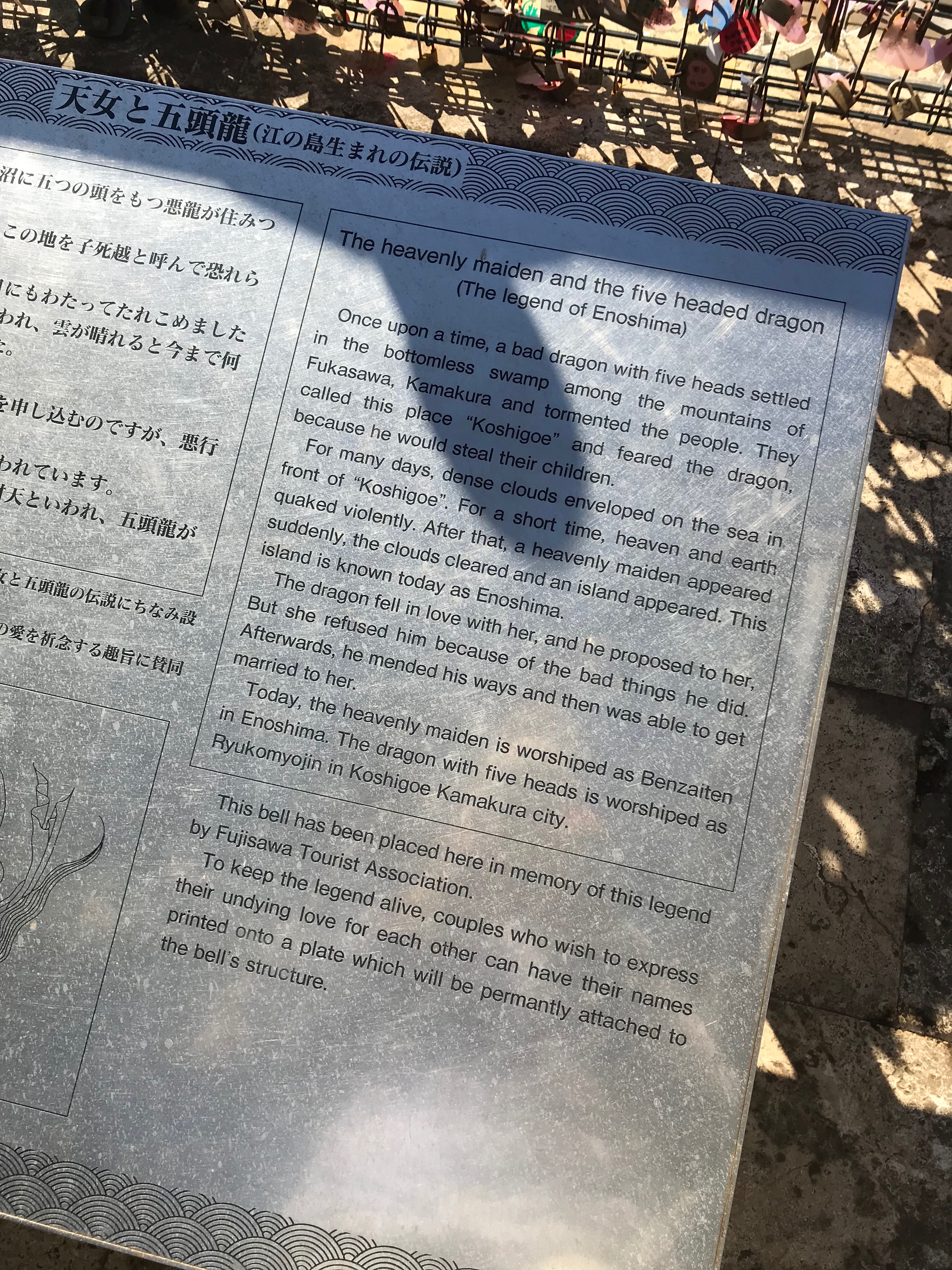 The caves were closed, but the beach at the bottom was not! I was completely mesmerized watching the waves hit the rocks, all against the backdrop of Mt. Fuji. Seriously, I just sat and stared and watched!

Others were enjoying the view as well, even climbing onto the wet rocks! 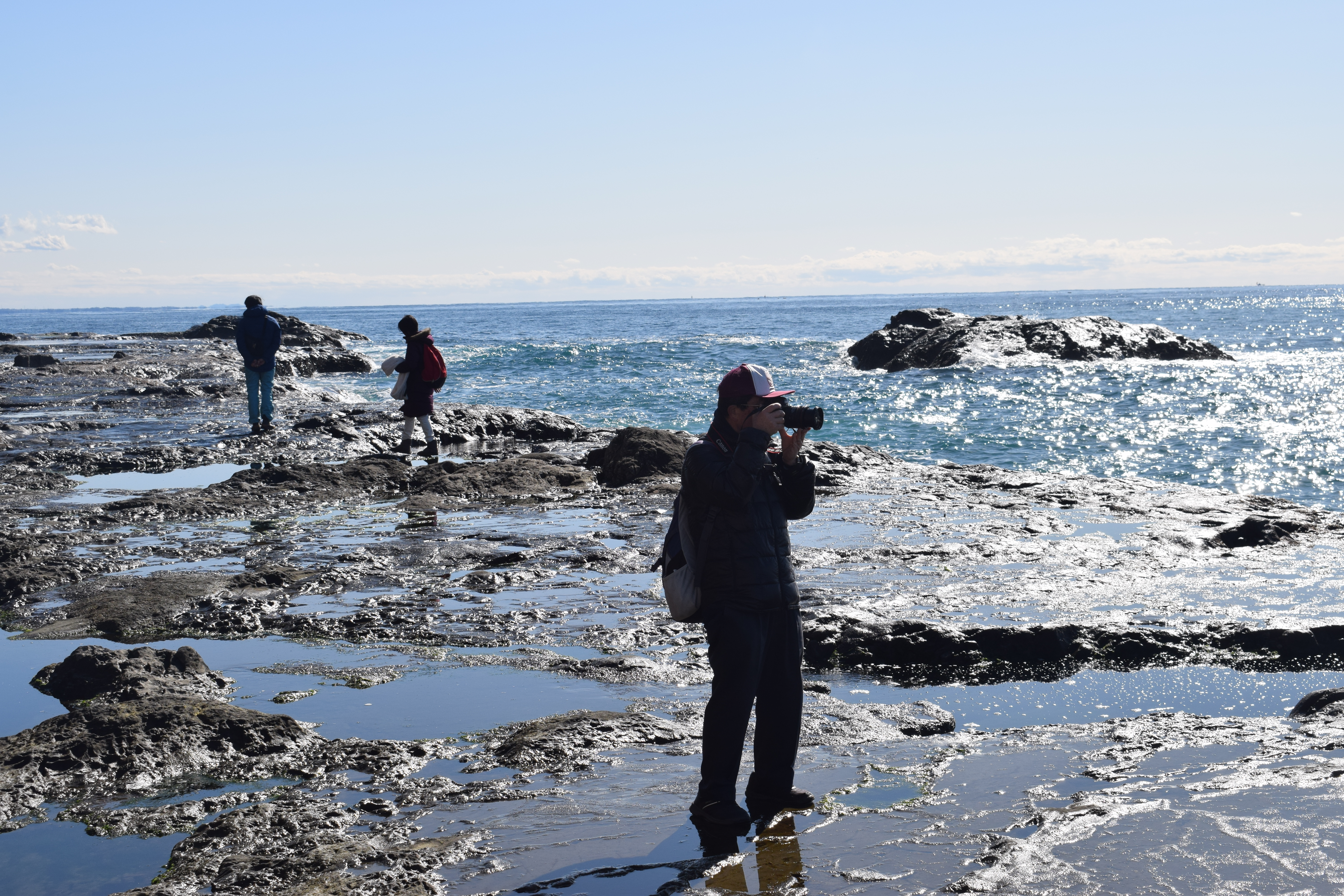 Finally, lunch time! A super popular dish on Enoshima is called Shirasu Don - baby sardines over rice. You can get it at pretty much every Japanese restaurant on the island. So why not select one with a gorgeous view?

We climbed back up to the top and got the dish at Uomitei, with miso soup and a very delicious marinated octopus with onions appetizer! 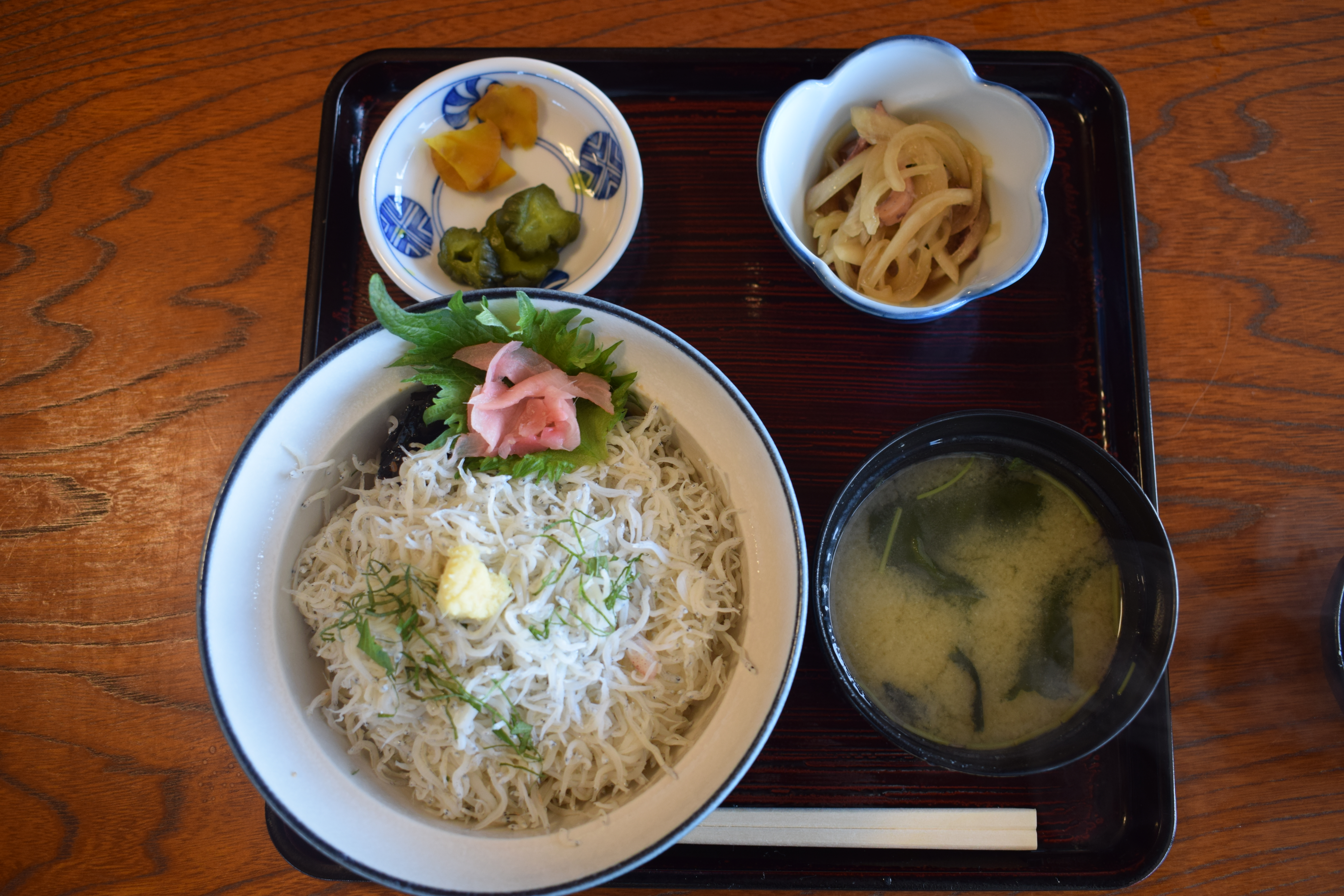 Can you see the baby sardines?!! 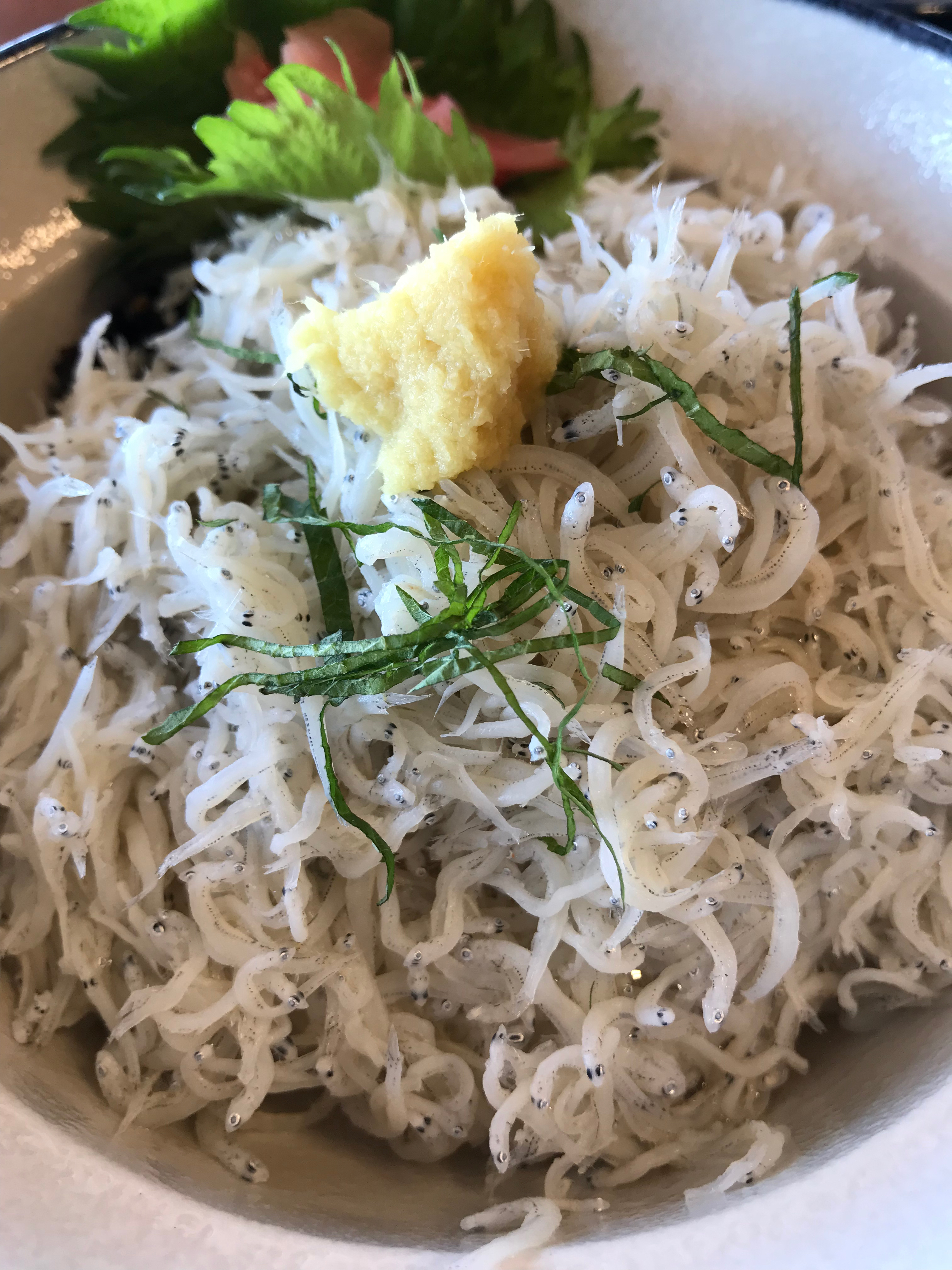 On the walk back from where we came, we found the famous 144-year old Japanese sweets shop called Nakamuraya Yōkanten. They have a very special dessert:

“Here you should definitely try the nori yōkan (110 yen including tax) which is a kind of jelly made with white bean paste and aonori or dried green seaweed. Yōkan made from white bean paste is really rare to find and was originally created in this store.” ~ Matcha Travel Magazine 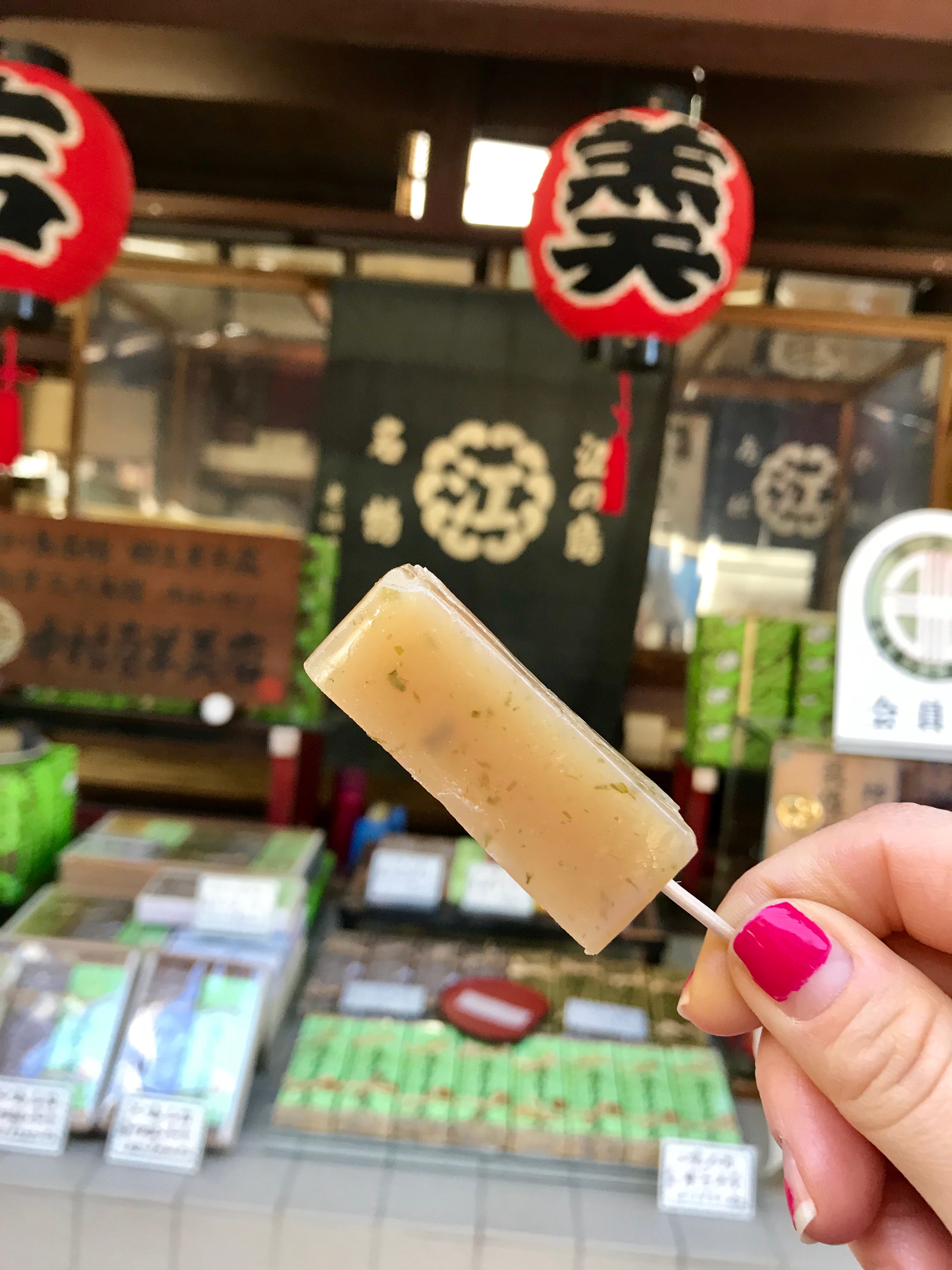 I’m not a big Japanese dessert person (except for ice cream) or jelly, so it tasted weird at first. But after finishing it, I found myself craving more. It was good!

After enjoying a squished octopus cracker (another amazing specialty of Enoshima) and a pet pig on a leash in pink coat (yes, that’s right!), we entered the Samuel Cocking Garden.

But first, the pet pig on a leash in a pink coat… 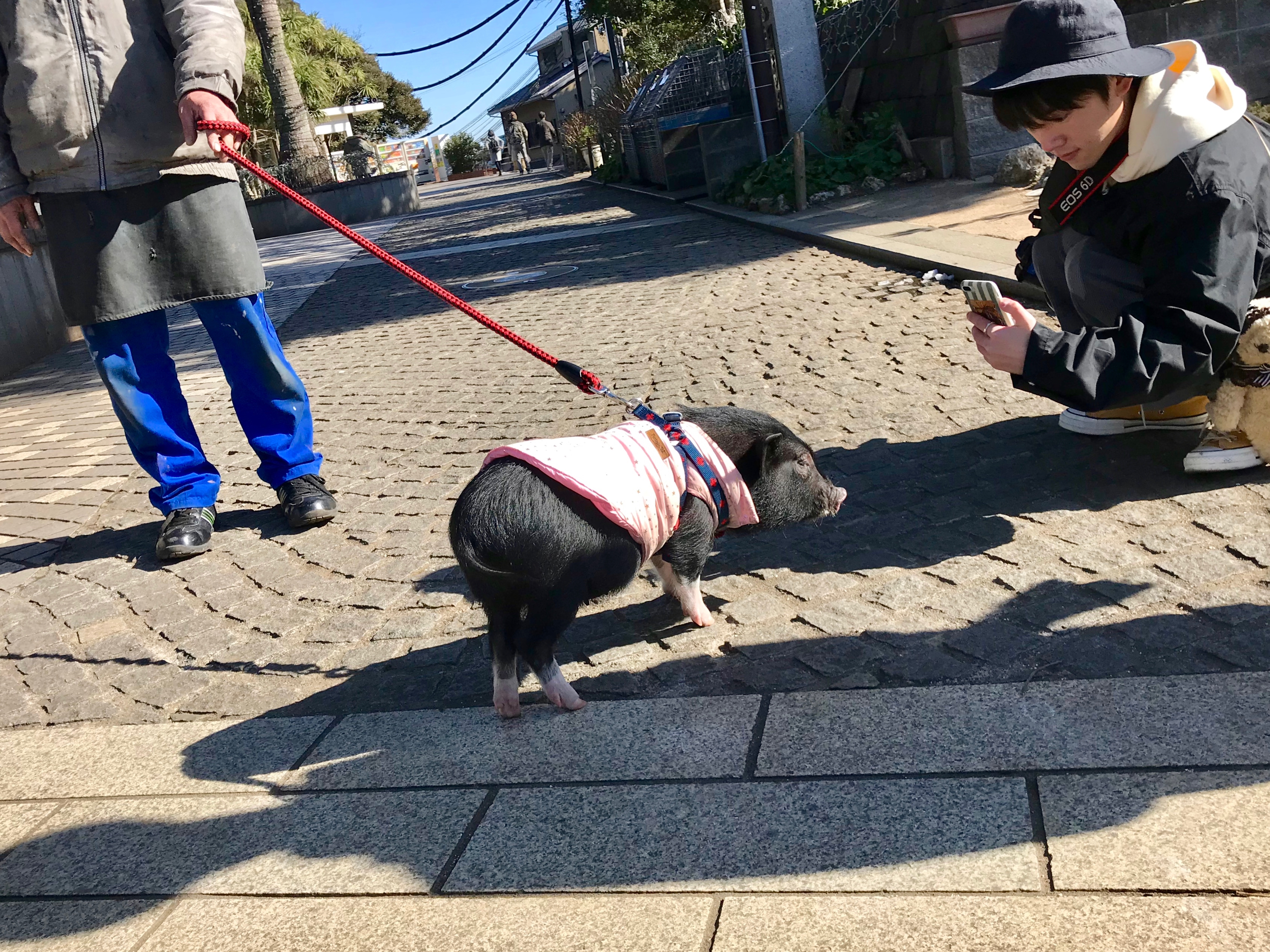 The last time I was at this garden, it was twilight and the garden was lit up with crazy illuminations. Nothing can beat that view, but being in the garden during daylight was not so bad either… The illumination with the fancy chandeliers was still pretty fun to walk through: 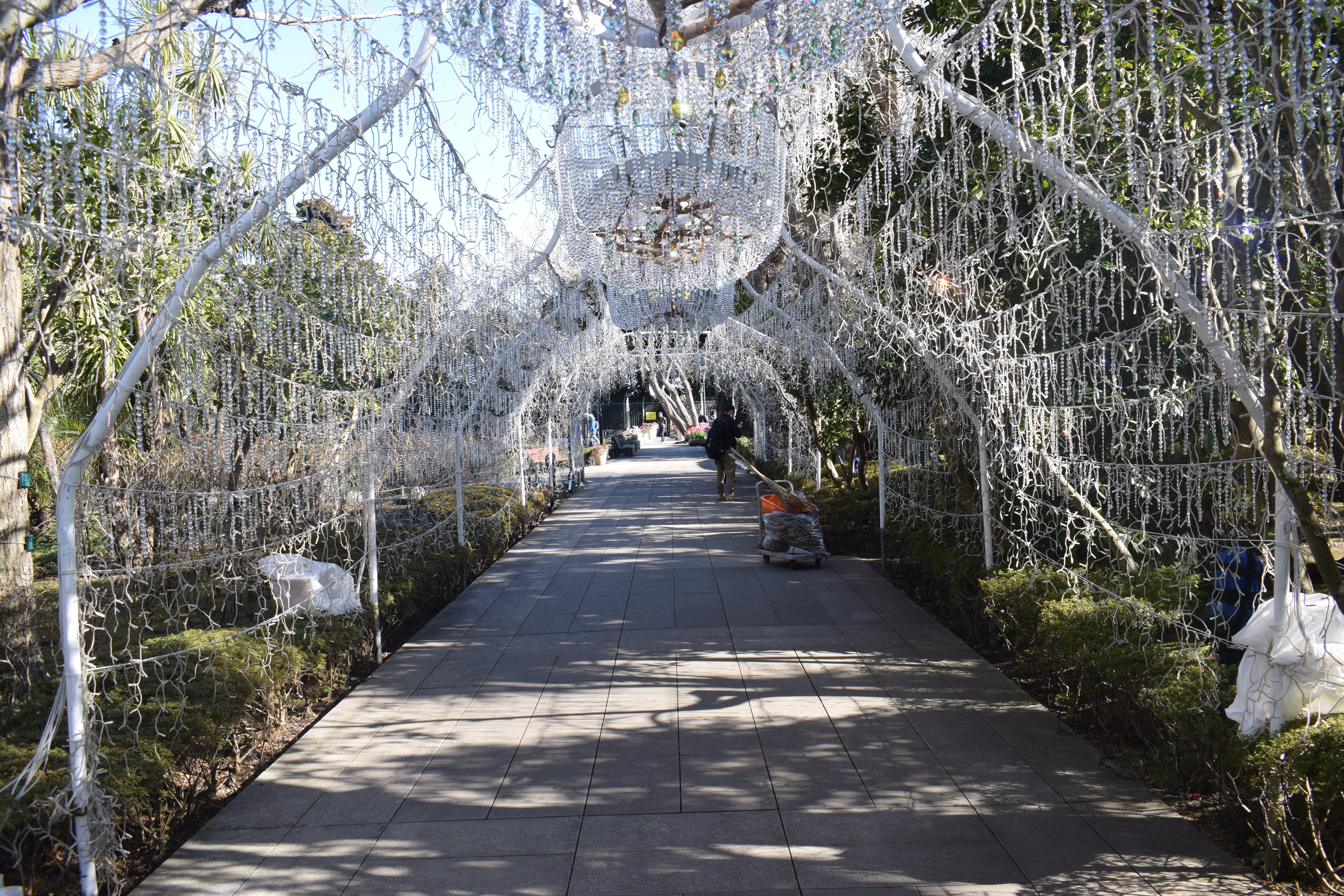 The crystals were sparkly in the sunlight! 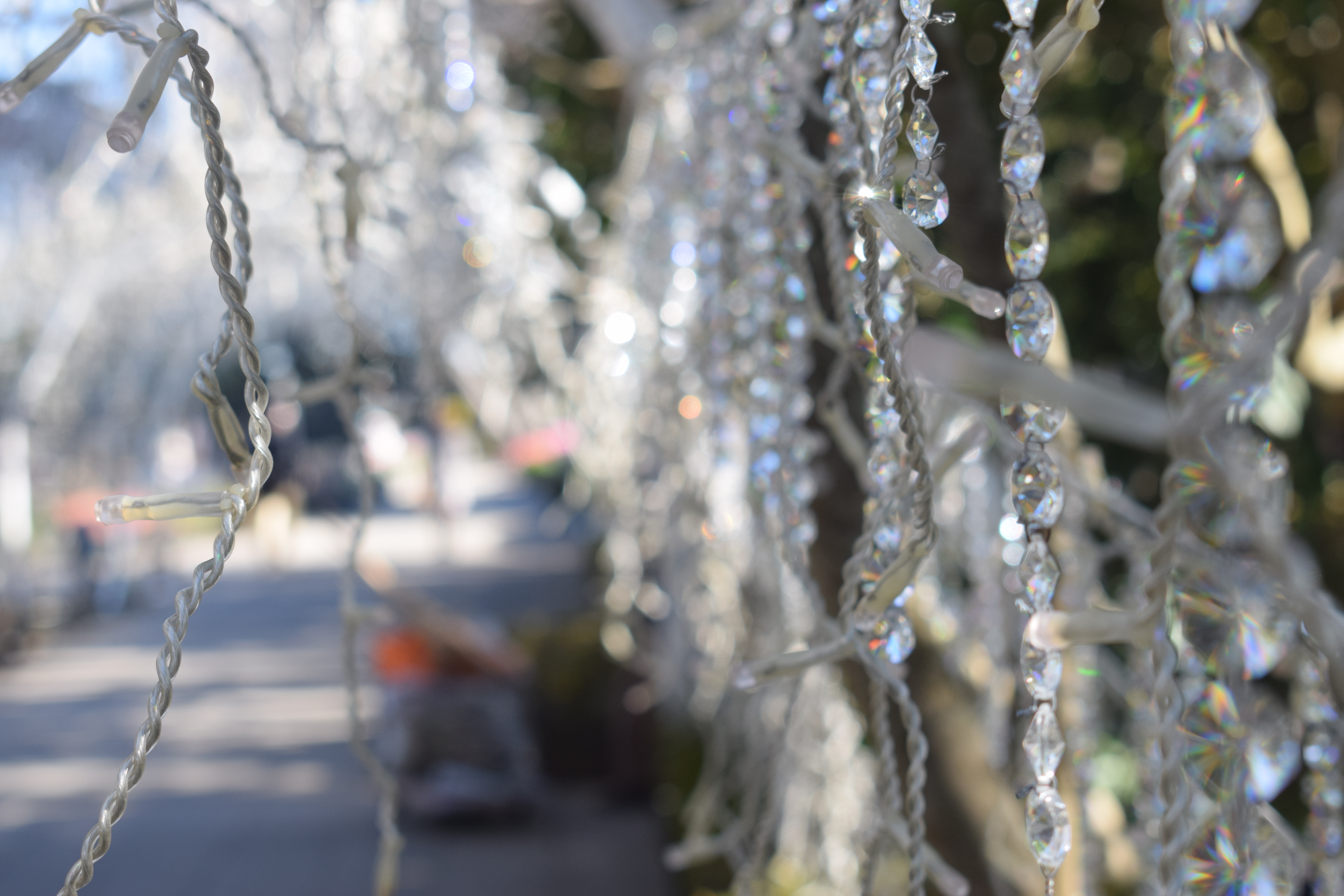 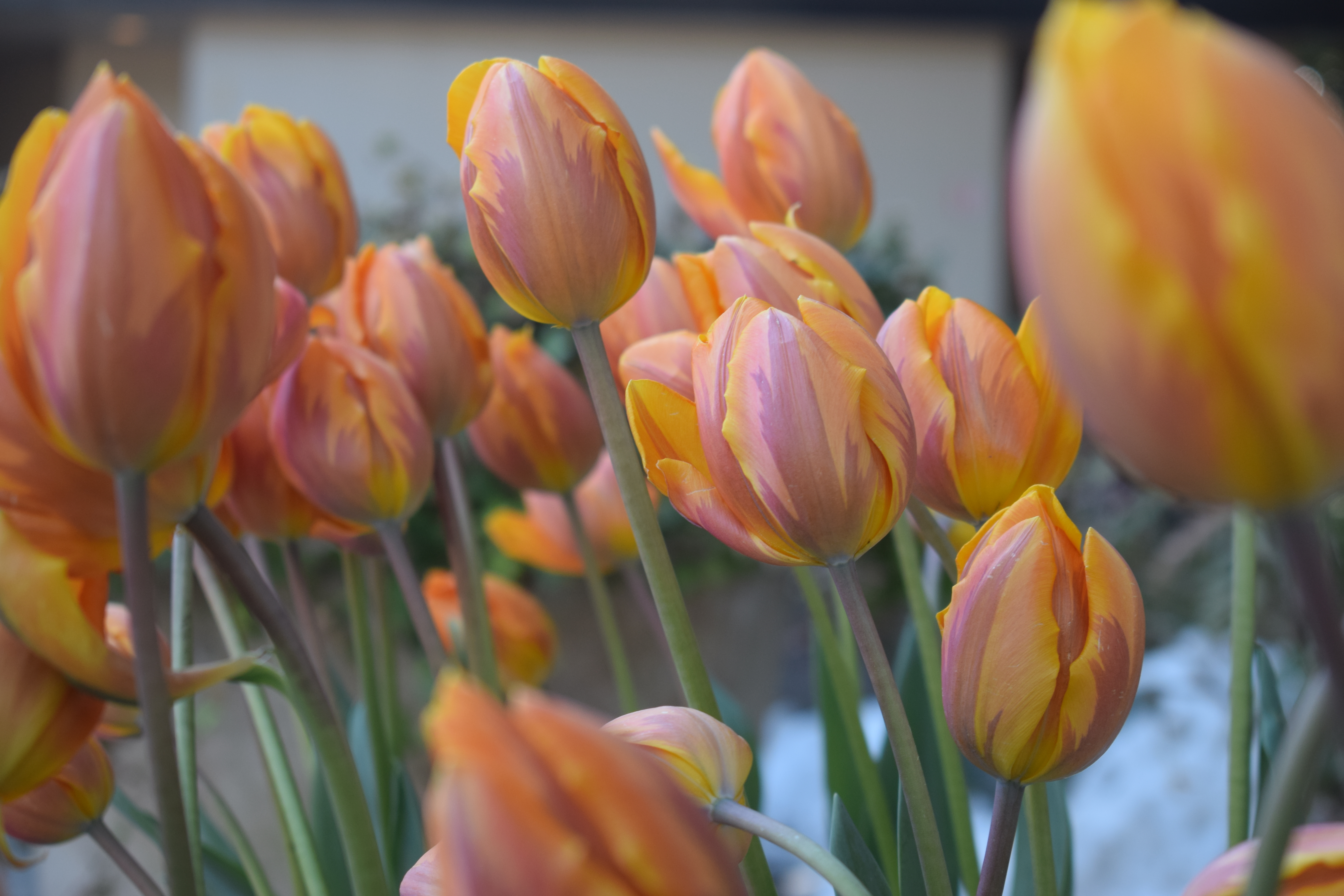 We took the elevator up to the top of the Enoshima Sea Candle to enjoy the views, but I was most excited to walk down the stairs. I would have climbed up, but only climbing down is allowed…

On the way out, I read about a famous matcha ice cream shop. Our phones died by this point, so we stopped at the first one we saw. The matcha ice cream comes in a wafer shell. There were several shells to choose from! 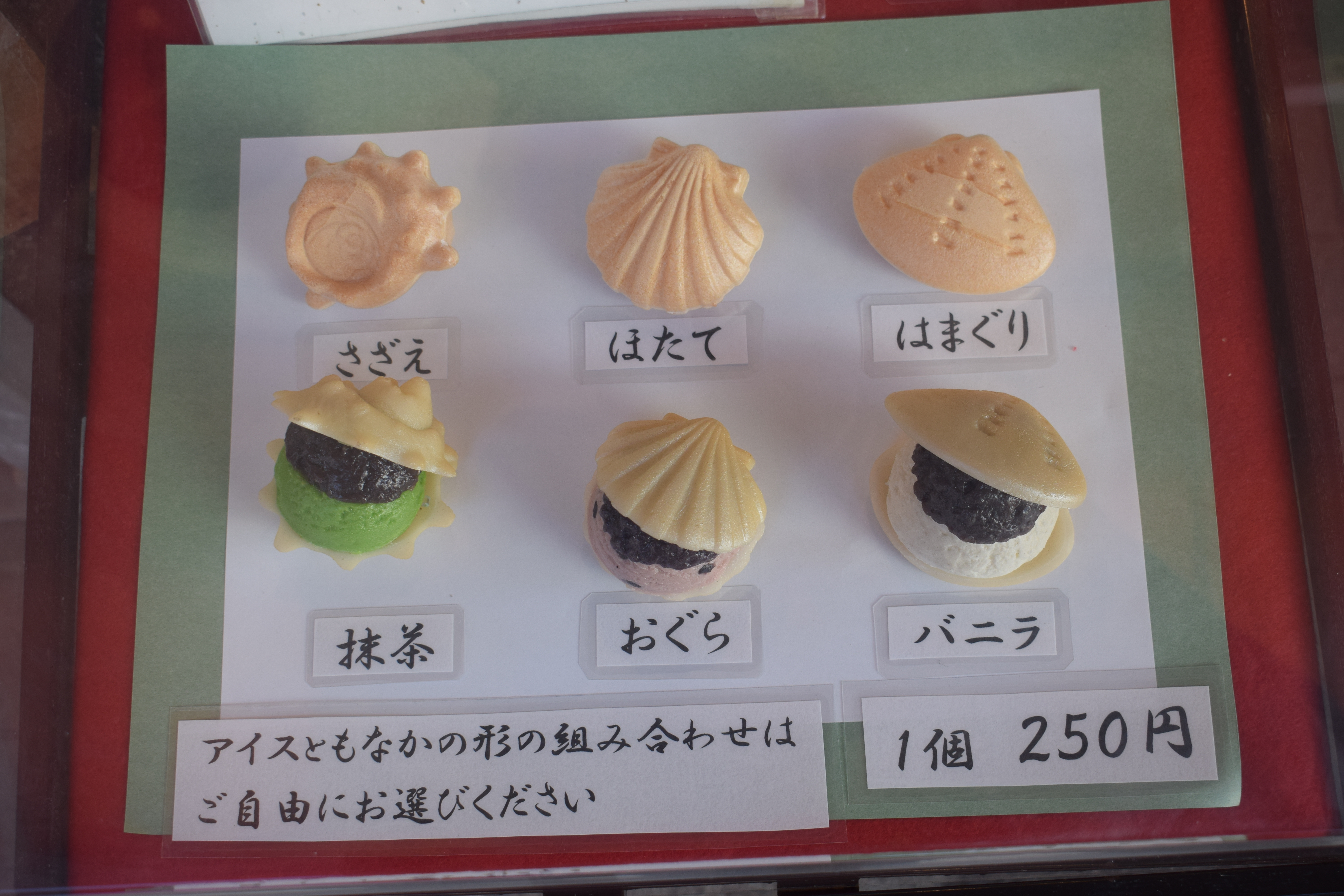 We sat down and enjoyed the ice cream, thinking it was THE ICE CREAM: 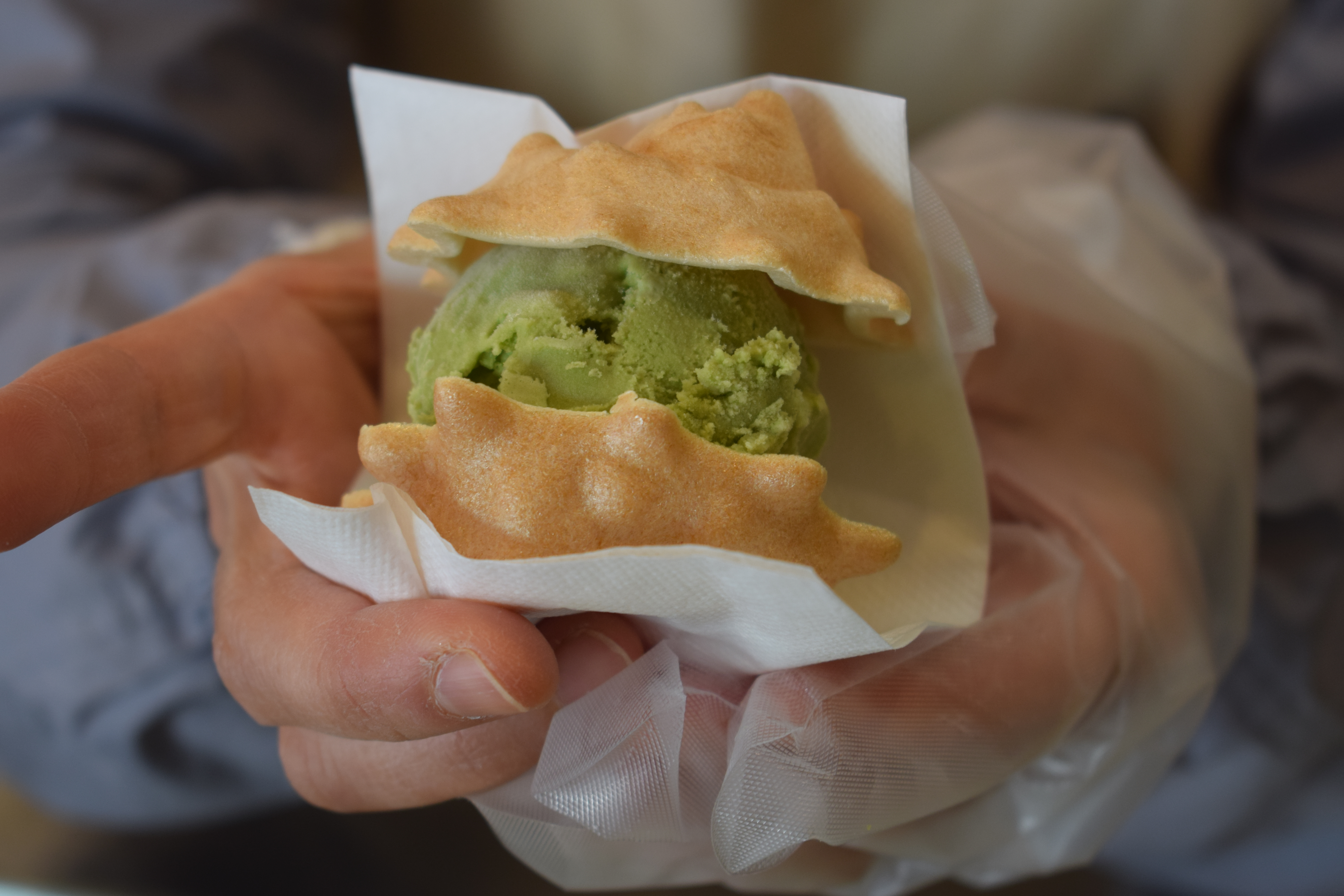 To be honest, it was a bit frozen, and the shell was not crunchy. But I like ice cream, so it was good. In Japan, they don’t add much sugar to it, so it actually tastes like matcha and not corn syrup…

We stepped outside this sweets shop only to find the actual sweets shop we meant to go to right next door!

“Inoue Sōhonpo located at the corner of the main street of Enoshima sells Japanese style confectionery. The Ice cream Monaka or ice cream sandwiched between wafers (400 yen including tax) which Inoue Sōhonten offers is a dish which has ice cream and sweet red bean paste sandwiched between two crisp wafers. As the fillings are covered with wafers, it is really easy to enjoy while walking.” ~ Matcha Travel Magazine

There was no choice, but to get another ice cream! No red bean paste for me though…

Ok, now this was incredible ice cream!! It tasted amazing, was the right temperature, and had a delicious crispy wafer. Perfect way to end our Enoshima adventure!

Next time you’re in Tokyo, make sure to take a day and visit Enoshima. Adventure awaits!

Watch more from our day here!