What It's Like to Float in a Sensory Deprivation Tank 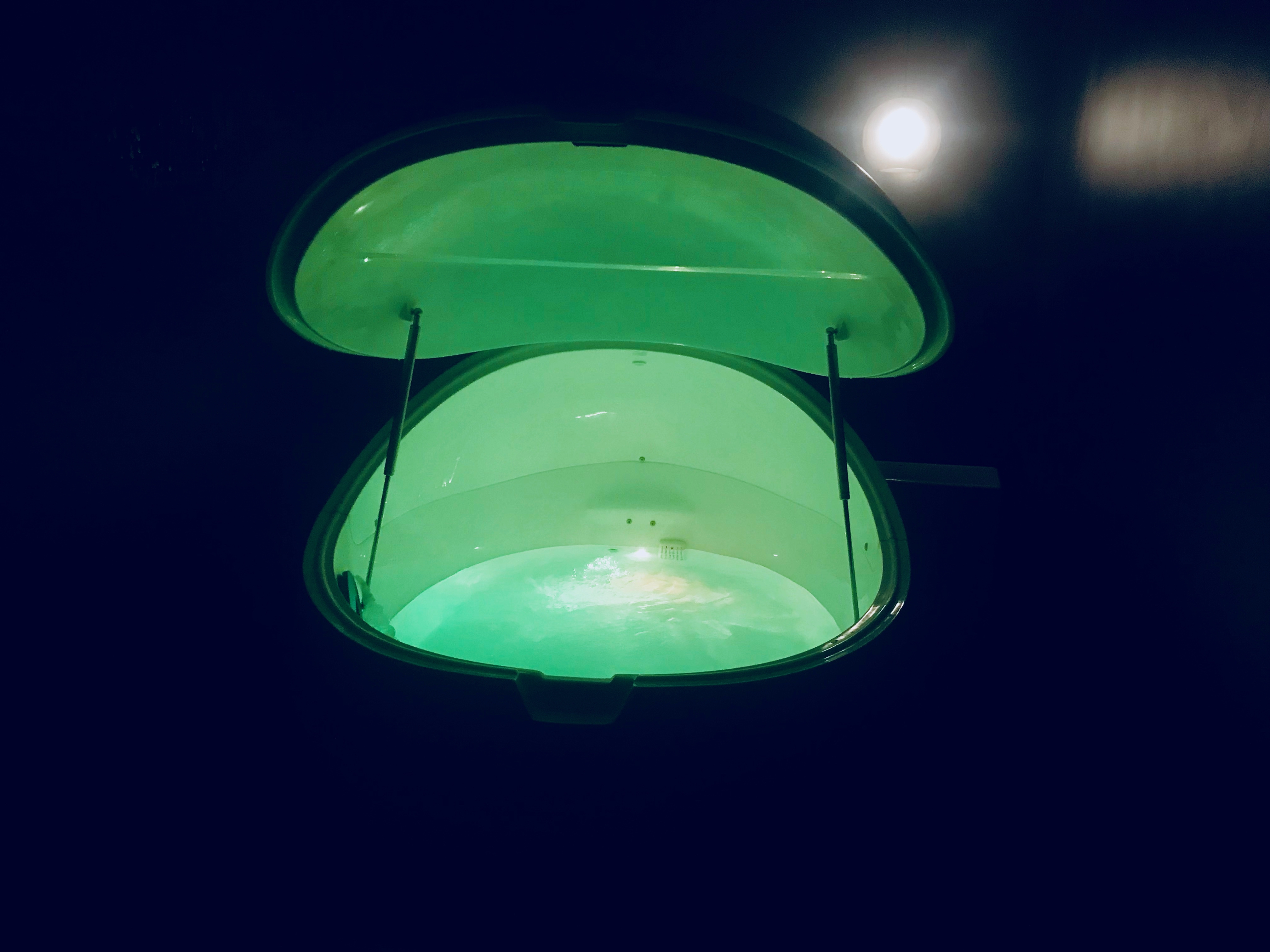 The first time I tried a sensory deprivation tank was in San Francisco several years ago - thanks Groupon!

“Inside our floatation tank 450 kg’s of Epsom-salts are added to 600l of water, creating a deep solution, which is heated to body temperature, 35°c. This temperature means that it is virtually impossible to distinguish between parts of the body that are in the water, and those that aren’t. The buoyancy created by the Epsom-salt creates an experience of weightlessness on the body. Removing the effects of gravity.” ~ SALT Float Spa

That’s more salt than in the Dead Sea! So you just effortlessly float! In addition to removing gravity, the float spas also remove all light and sound from the environment, leaving your brain completely without any sensory input! You’re basically back in your mother’s womb.

The floatation tank in San Francisco was INTENSE. It seemed like a real metal tank. They LOCKED the door after me and all! There was an emergency button for them to come and pull me out, but that wasn’t that comforting in complete darkness…

The process of floating is pretty simple. You take a shower, go in and float for 60 minutes, get out and shower once more.

The floating part can get weird - after all, your brain is getting no stimulation! Not even a sense of gravity! That first time, I remember just being super bored. I would float from one side of the tank to the other. Eventually I probably stopped and laid there soooo bored.

But it was what happened after the float that shocked me. I was sooooooooooooo happy! It was ridiculous.

Years later, I was in Queenstown deprived of sleep after my first night at a hostel, when I saw a chance for another float at the SALT Float Spa.

Now I got to experience how much the floating industry has improved since the last time I did it! SALT Float Spa was sooooo nice! Each customer gets a super nice room with a shower and great natural products (soap, shampoo, conditioner). The total float time is 60 minutes, but the process before and after is super relaxing.

You take a shower, then when you’re ready, get into the tank. The tank is super friendly - more like a nice tub than the scary metal box I remember! There are relaxing colorful lights in there and it’s easy to close and open the tub on your own (so you don’t feel trapped in a large metal box with no lights or sound!). The tub had two buttons - one for turning off the lights and one for signaling to the reception that you’d like to start your 60 minutes.

They play relaxing music for the first 15 minutes to get your relaxed and comfortable. They also play the music 5 minutes before the end of the float so you can easily transition back and get ready to shower. After showering, you go to a super nice relaxation room where they give you a salt shot to rehydrate. There is also a selection of nice teas and water.

It was a real spa experience!

I decided to do one more float before leaving Queenstown. This time was similar to my first time. I got a little bored and moved from one side of the tank to another, then stopped.

But then at one point, I consciously noticed that there was NOTHING! My brain just stopped. I didn’t have any thoughts, it was complete darkness, I couldn’t feel my body. It felt AMAZING! Complete piece. I could have been in that state forever, but then at that moment, the 5-minutes-left music came on.

When you’re in the floatation tank, there is no sense of time, so I really have no idea how long I was in that state for real, but it felt like just a moment. A perfect moment.

It seems like I experienced the magical “theta brainwave state” that the sensory deprivation promotes:

“After a few sessions many floaters naturally enter a theta brainwave state that will boost creativity, enhance energy, experience profound insights and even life changing experiences. Types of brainwaves: (Floating promotes both Alpha and Theta brainwaves)

Beta waves (12-30 Hz): This is your conscious awake state and is focused on the outside world. The higher spectrum of 18-30 Hz is associated with busy or anxious thinking.

Alpha waves (8-12 Hz): You are alert but unfocused. One’s eyes are usually closed, feeling relaxed. When athletes are in the “zone” they are in an alpha state. Muscle memory takes over and peak performance is achieved. Alpha is the bridge between high arousal and low arousal states.

Theta waves (4-7 Hz): The theta state is a state of calmness and relax deepening into drowsiness and the brain shifts to more powerful, slower rhythmic waves. This happens twice a day with falling into sleep and coming out of sleep. It is the state the can be accompanied by dreamlike but vivid mental images usually from memories. Offers a free association state, quieting the mind and body and promotes creativity. These waves are predominating in young children. It is a meditative state, one that skilled monks can do at will after twenty years of discipline and practice

I’ve recently noticed that my mind is calmer and I’m more focused in general. Maybe it’s other things, but I think it’s due to the floatation. After experiencing that state of nothingness, I’m craving it more and more - it felt so good.

I’m definitely going to float some more when I get a chance!