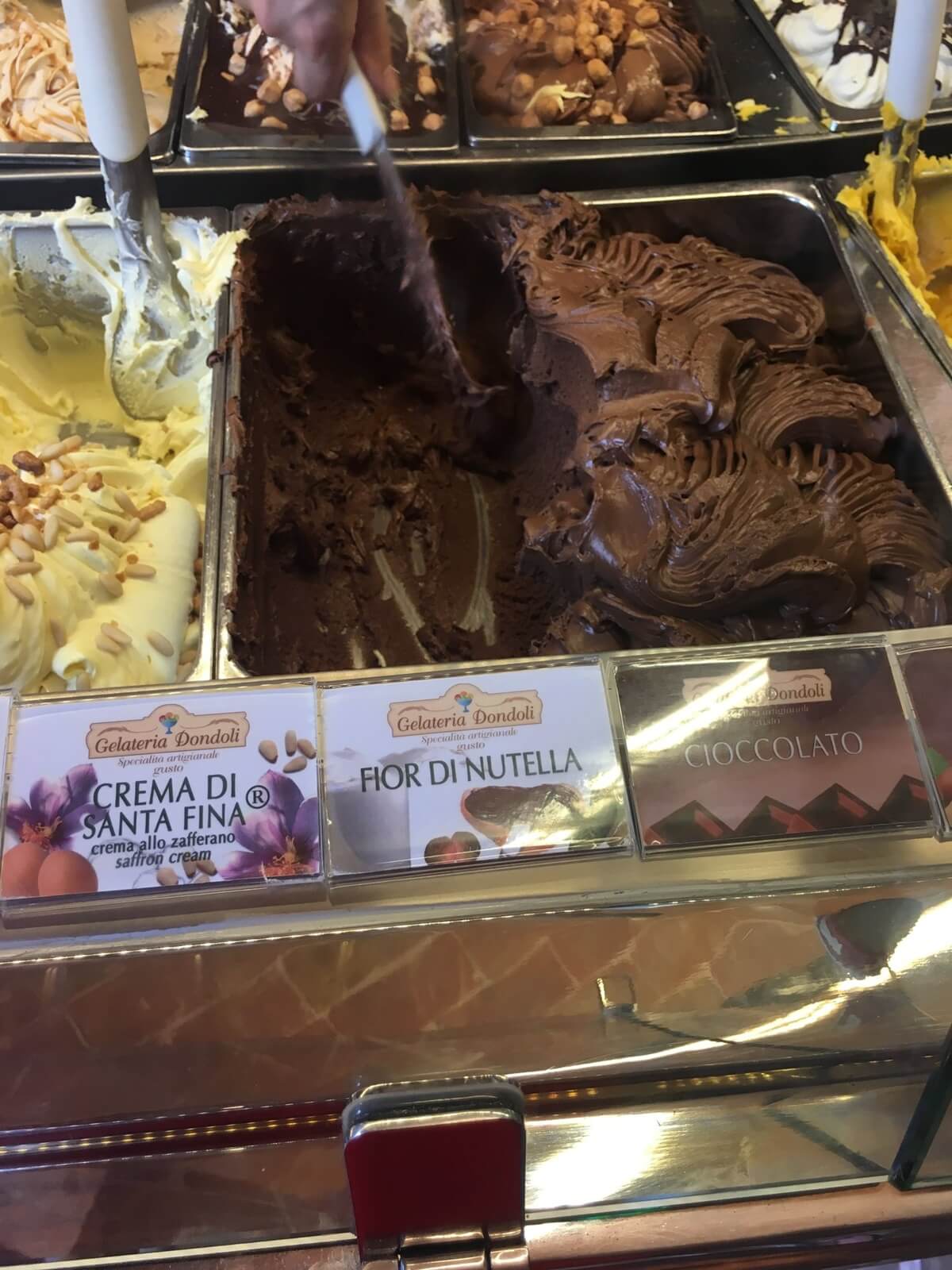 I'll be honest. I am a HUGE ice cream lover - seriously, it's an addiction! But I usually stay away from Gelato. It's just too sweet and I don't get it. But now I'm in Italy! And gelato is the country's ice cream (even though a sign I saw said it is in fact NOT ice cream!). So of course I HAVE TO HAVE IT! And I'm in Italy after all, the land of gelato, it must be good here!

Unfortunately, I've only been disappointed. The first gelato I tried here was again way too sweet. 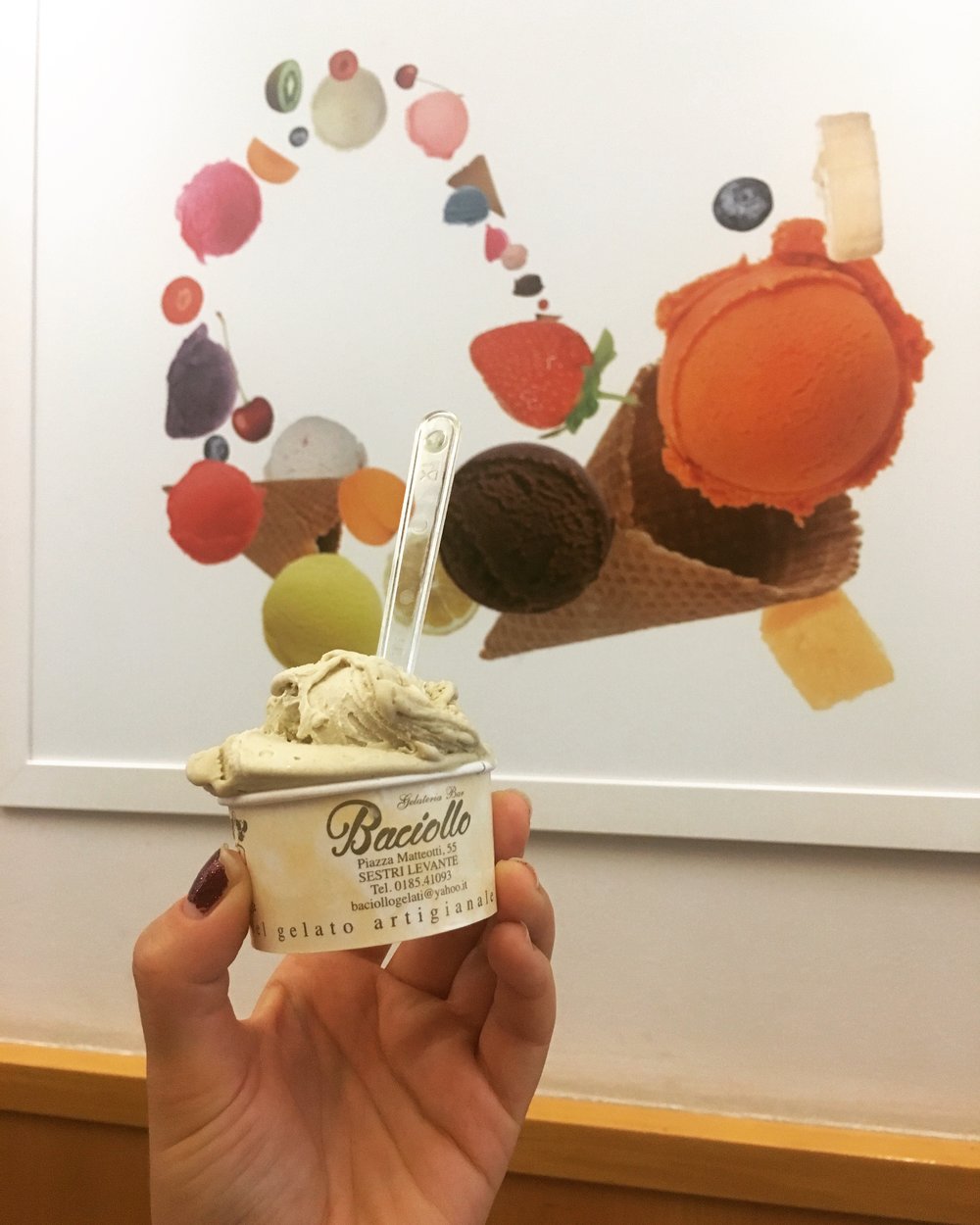 But I didn't give up! I kept trying more gelato in hopes that I'll like it! Unfortunately, I ended up discretely throwing it away after trying - not worth it. 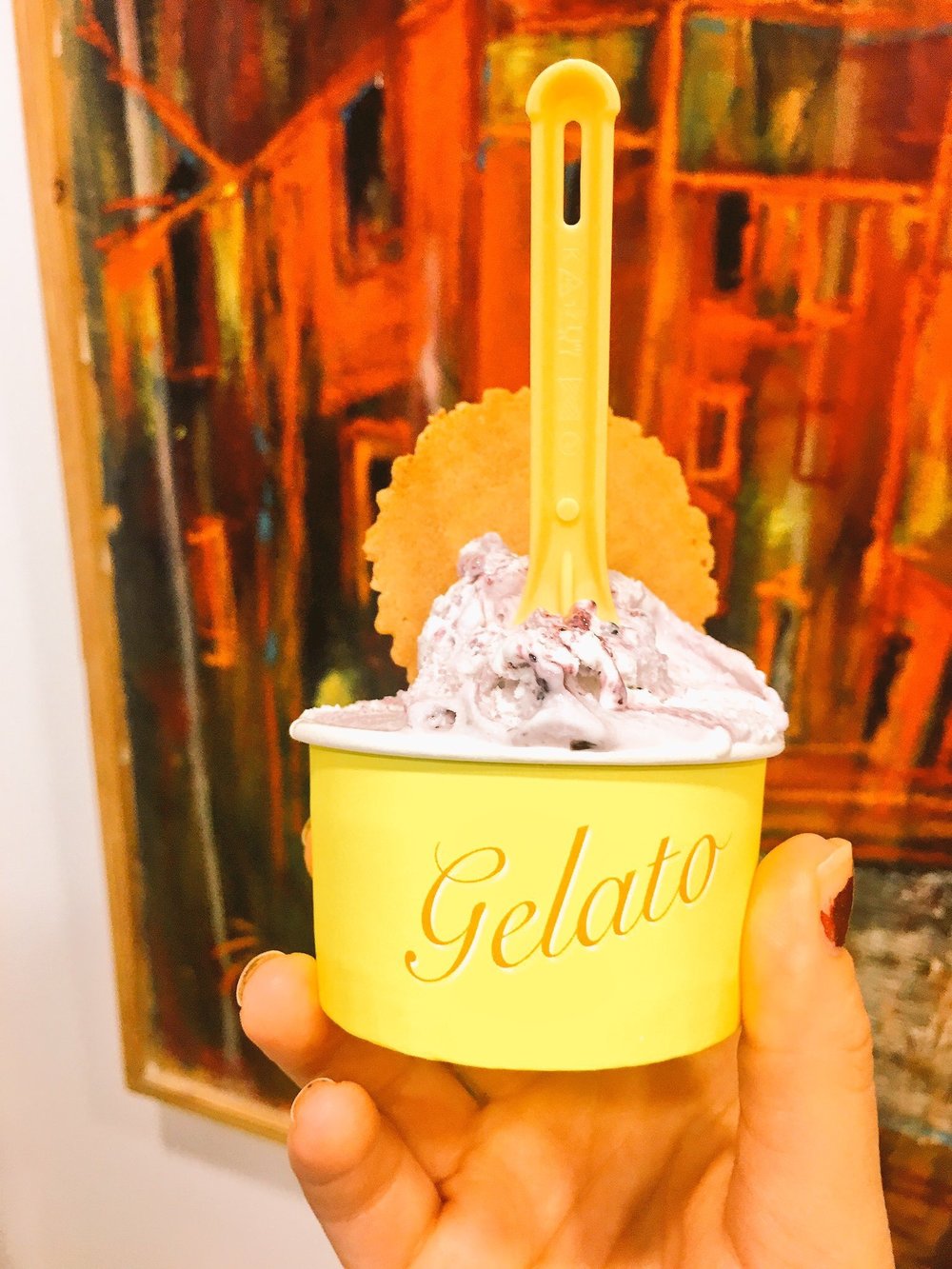 But alas, I just had to give up. Maybe gelato just wasn't my thing... That is until I visited San Gimignano and the line to Gelateria Dondoli caught my attention... 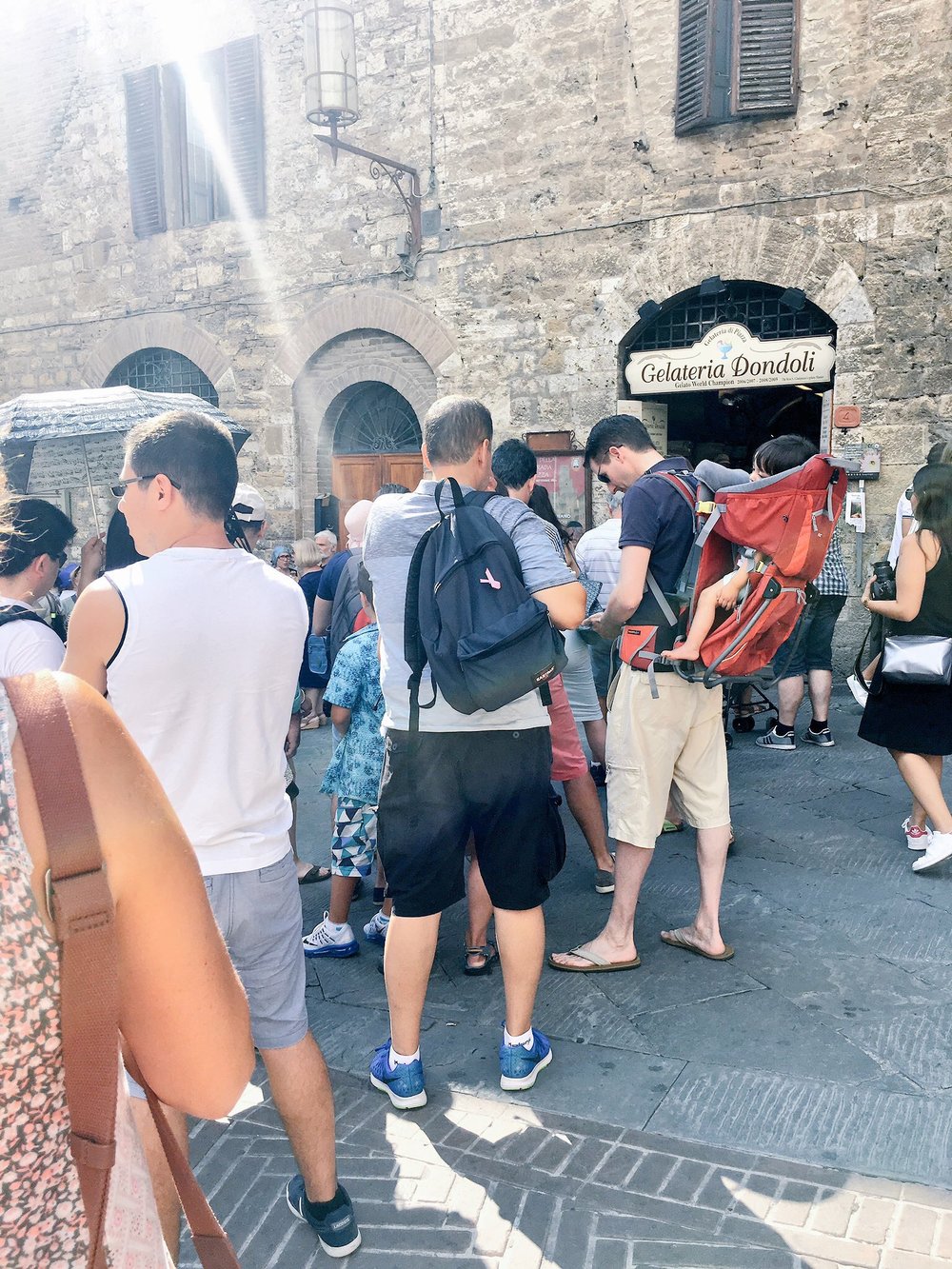 The sign said that this is a Gelato World Champion... 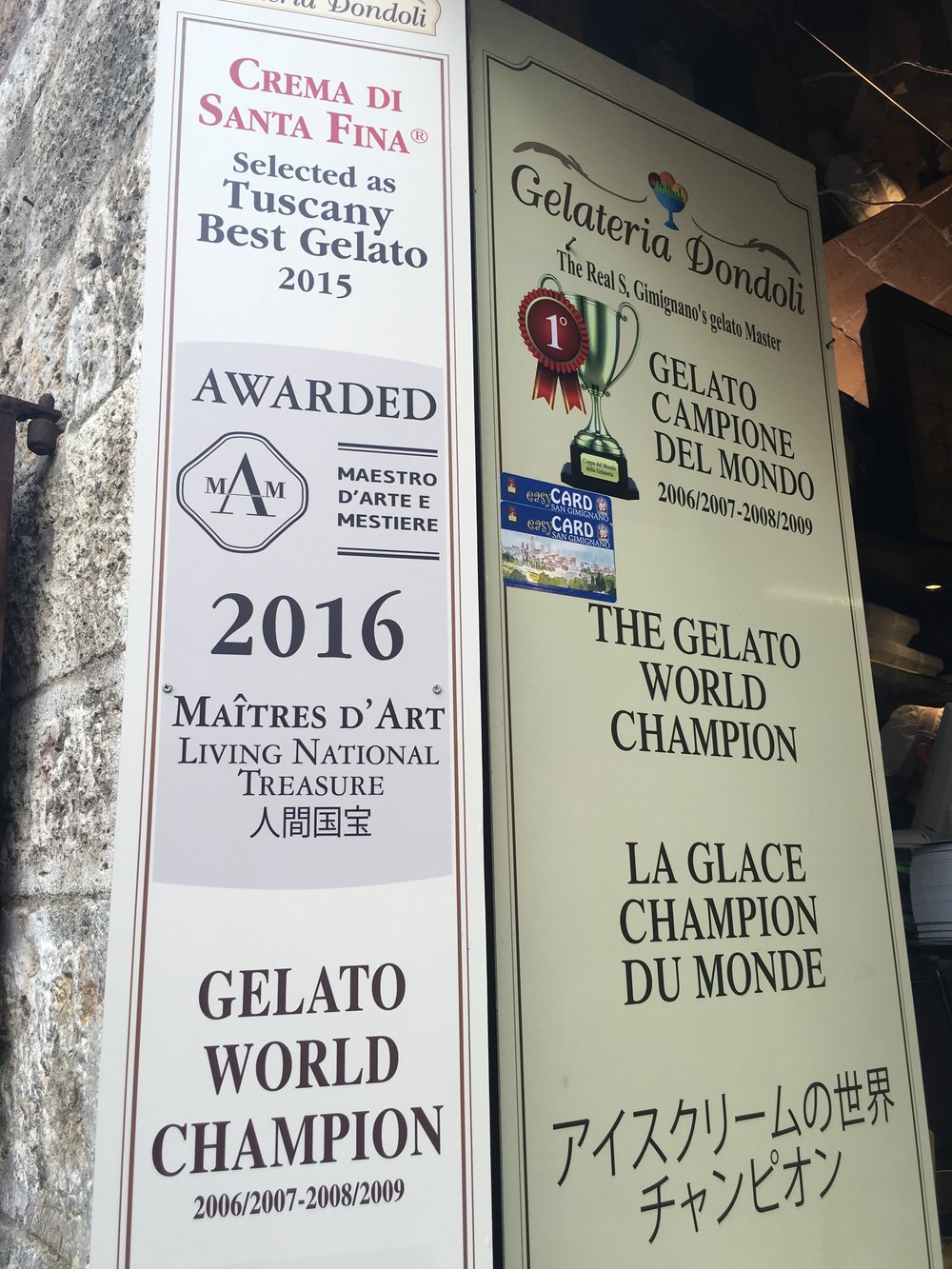 A tour guide that went by confirmed that this was in fact a legit place vs some touristy gimmick. At that point, I knew I couldn't leave San Gimignano without trying this gelato.

I waited in line, and when I walked in, I asked for them to recommend a flavor. They recommended "Crema di Santa Fina" (which you can see is the Tuscany Best Gelato winner from their sign). I also got the chocolate: 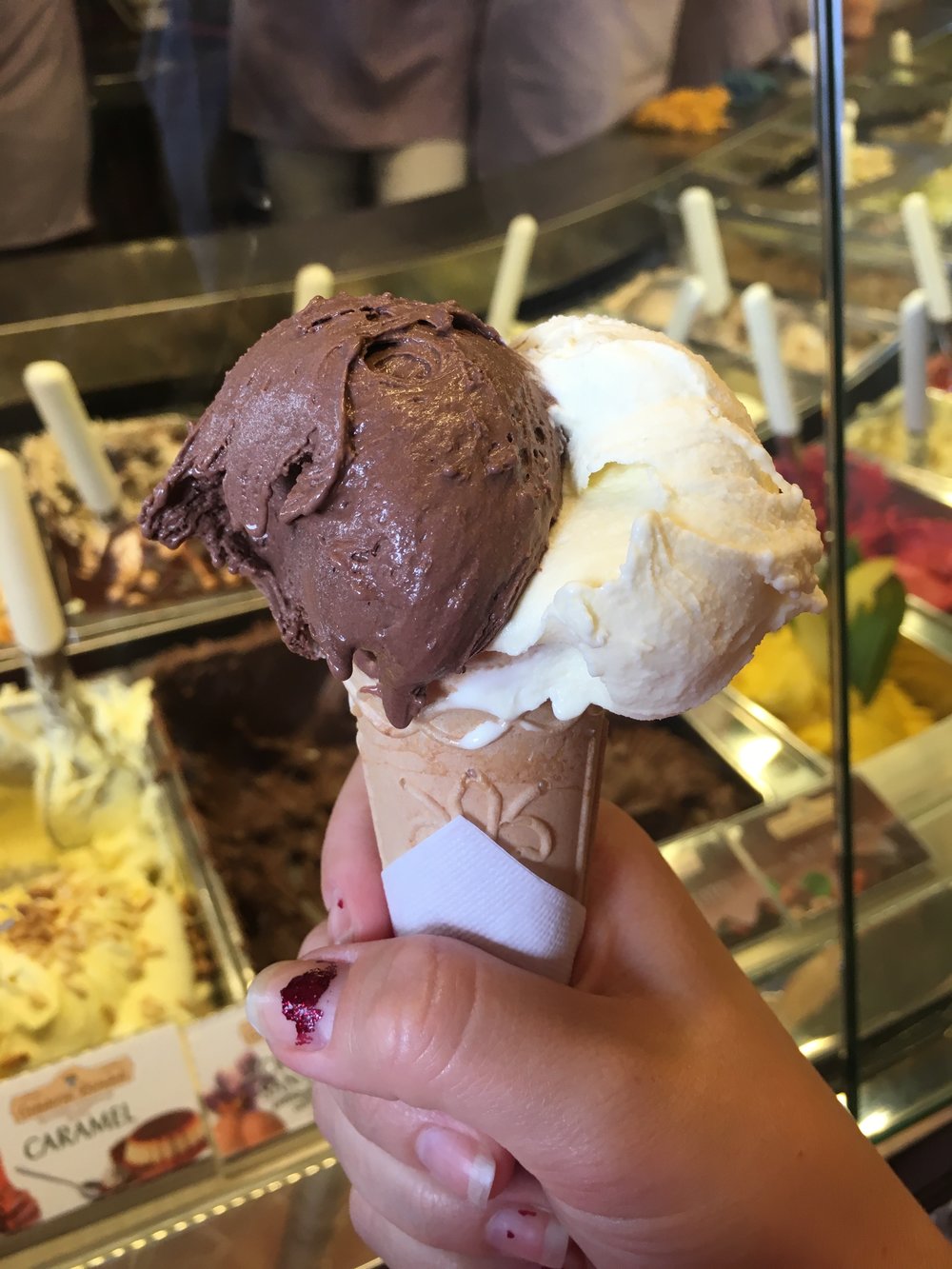 I took the gelato and went off to an area in the plaza where I can sit and enjoy it. IT WAS PHENOMENAL!!! Much more than I had ever hoped for for a good gelato (actually, I had no reference for a good gelato, so I had no expectations). It was still sweet, but I could actually taste the fresh ingredients like I'm supposed to instead of just straight sugar! Just unbelievable

I was absolutely ecstatic that good gelato does exist in the world! Oh, and I swore to not eat any other gelato besides Dondoli ever again... It's like Vegas - when you hit the jackpot, you walk away! Well, ok... if there is another place that is the Wold Gelato Champion, I'll probably give it a try. But no more random bad sugary gelato for this girl!